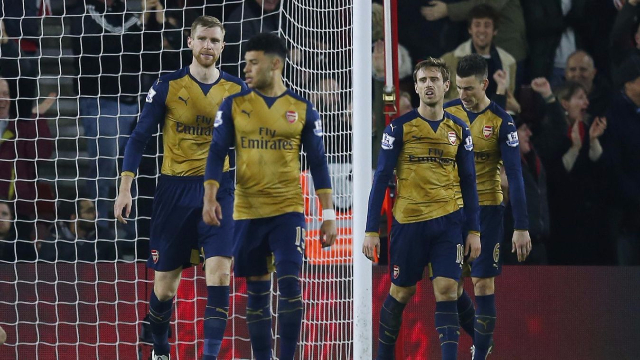 In a relatively predictable turn of events, Arsenal followed up their magnificent victory over Manchester City with a disastrous capitulation at Southampton.

On reflection, the officials got key decisions wrong in the build-up to the first three goals – but all were tight calls made in a split second. They can’t excuse the Gunners’ ineptitude.

It was a submission that proved their injury crisis is probably fatal. Per Mertesacker and Laurent Koscielny, so reliable in recent weeks, were embarrassed by Shane Long. The Irishman was allowed to hassle a back four lacking protection, with the absence of Francis Coquelin glaring, before exposing the German's alarming lack of pace. Meanwhile, Joel Campbell was anonymous in a space Alexis Sanchez should have been occupying.

"Well, I think Southampton made the game very physical. We lost too many challenges and that explains why we lost the game. But that's one aspect, so well done to them. The second aspect is that on the first three goals we were really unlucky with the decision of the referee.

"The first goal was offside, the second goal was a foul and third goal was a goal-kick, so if you're a bit below par and on top of that you have the first three goals against you in the decision-making then it's even more difficult.

WHY DO ARSENAL ALWAYS BOTTLE IT?

Here’s how Arsenal work… When the pessimism threatens to seep into the most ardent of Arsenal fans, they pull off an amazing result – see victory against Bayern Munich, and subsequent last 16 qualification in the Champions League – and inject belief into the terraces. Then, when the optimism is flowing through the veins and people start muttering 'this is definitely Arsenal’s year', it falls apart. Repeat. For eternity. There appears to be an ingrained mental fragility that surfaces at the most destructive time. While their squad has more leaders than previous years, they still struggle in physical encounters. Can they really adapt when their passing game is smothered? It's doubtful.

CAN WENGER SURVIVE ANOTHER FAILURE?

Probably, but that doesn’t mean he should.

Sure, it's only one defeat, but this reality check is an annual occurrence. It might happen in December, it might happen in March, but one thing has become apparent in the last decade: it will always happen. And that’s why, despite their frighteningly good squad on paper, it’s hard to see them winning the Premier League.

The barometer for success at Arsenal has diminished since the glory days of Patrick Vieira, Thierry Henry and Lauren. Now fourth place is celebrated like the Champions League; FA Cup victories over Aston Villa prompt Jack Wilshere to get ballsy on the microphone.

This is Arsenal’s best chance of glory. Everyone is saying it. They have a squad to rival Manchester City’s – and Leicester’s descent will surely occur in the coming months. But can you really imagine Wenger hoisting up the trophy again?

They have two major problems that haven't been healed: injuries and mental frailness. Something is awry at Arsenal. It has been for years. Surely, if this season doesn't produce a title, someone else should be handed a chance.

When the latest chorus of #Wengerout subsides, Arsenal welcome Bournemouth to north London on Monday evening. The pendulum will likely swing again, optimism will reverberate around the Emirates and the Gunners will be contemplating the title once more…