China jumps to Ghana’s defence on illegal arms deal but… 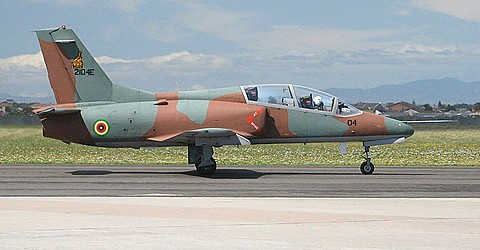 China has jumped to the defence of Ghana in an arms deal in which an illegal British broker has been convicted for supplying fighter jets to the Ghanaian army without license six years ago.

The deal had been under investigation by the UK customs authority since 2007.

The British Court found that the arms dealer Christopher McDowell was engaged in an illegal deal and sentenced him to a-two-year jail term.

Joy News first broke the news and has since cited official statement from the China National Aero-Technology Import and Export Corporation clarifying Ghana’s involvement in the deal.

The Chinese company claims Chris MacDowell is their agent in West Africa and only introduced Ghana to them.

The statement said after the introduction, the Chinese company dealt directly with government of Ghana.

The statement further stated that the Ghana government negotiated the lowest price the company has ever sold Fighter jets to any country.

Whilst the statement may have exonerated the government of Ghana from any wrong doing, the Head of Research at the Kofi Annan International Peace Keeping Training Centre, Dr. Kwesi Aning who has written extensively about Ghana’s military arms deals said Ghana needed to have done a lot better.

He told Joy News the parties- the Chinese company and the government of Ghana- ought to have checked the background of the individual they were dealing with.

He said the Parliament of Ghana ought to have done a lot of due diligence before going ahead of the deal.

He said the nation must bring in a net work of individuals and professionals with an understanding and expertise on how some of these international transactions are done.

The Executive Secretary of the local chapter of the Transparency International, Vitus Azeem said it was enough that Ghana had a good deal in the end.

“The fact that you got the lowest price does not mean you got the highest quality,” he stated.