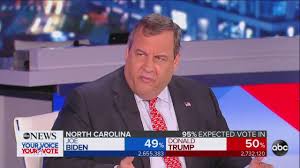 Former New Jersey Gov. Chris Christie called on President Trump to provide evidence for his claims in the White House briefing room, which, he said, “inflame without informing.”

“So if this stuff is going on that the President’s talking about, all of us want it ferreted out, because it would undercut everything that we believe in in our system.

“But as a prosecutor, that’s like asking me to indict someone without showing me any evidence. If you’re gonna say those things from behind the podium at the White House – it’s his right to do it, it’s his right to pursue legal action, but show us the evidence,” Christie said on ABC News Thursday.

Christie is an ABC contributor.

Trump has not shown evidence to back up his claims of election fraud, which have so far been completely unsubstantiated.

“We heard nothing today about any evidence. I want to know what backs up what he said, so that I can analyze it.

And let me tell you, if he’s right I’ll be outraged, I’m sure you would be, too,” Christie said.