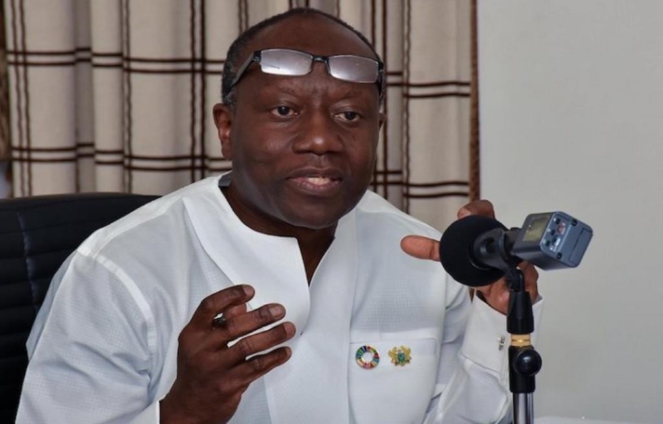 The Minister-designate of Finance, Mr Ken Ofori-Atta, says climate-conscious industrialisation and digitalisation are keys to Africa’s recovery and structural transformation of the economies. He said Africa’s industrialisation was good not only for Africa but the World at large.

Mr Ofori-Attah was speaking at the two-day 53rd Session of the ECA Conference of African Ministers of Finance, Planning and Economic Development on the theme: “Africa’s Sustainable industrialisation and Diversification in the Digital Era in the context of Covid-19.”

The virtual meeting was organised by the ECA and monitored by the Ghana News Agency. Mr Ofori-Atta said the event was his “first day back” in office and first international engagement after a precarious medical treatment following post-Covid-19 complications.

According to him, Africa showed remarkable resilience against the odds, effectively curbing the global pandemic’s initial wave, albeit a GDP contraction by 2.1 percent compared to a 3.5 percent contraction in global GDP.

However, he said the second wave had depleted buffers while the economies were contracting amid sharp increases in infections and deaths. These developments are overwhelming our health systems as a result, the Real GDP in Africa is projected to grow by 3.4 percent in 2021, compared to the projected global growth of 5.5 percent.

He said the Covid-19 crisis brought political, economic and social disruptions which had fundamentally changed the traditional context for decision making.

“For Africa, we are staring down the prospect of uneven economic growth unless we get our build-back strategy right,” Mr Ofori-Atta said.

He said leveraging African integration and regional value chains and scaling digital transformation and inclusive innovation was important. By 2050, Africa will be home to a quarter of the World’s population, more than half of the global youth and about $29 trillion of GDP. It is, therefore, in the global collective interest to see Africa succeed.

The Finance Minister said, “Our approach to beating this pandemic will make the difference between a lost decade and a rapid recovery that puts us on a sustainable growth trajectory.“

He said Ghana’s indigenous solution to achieving this shift was the GH¢ 100 billion (USB 17 Billion) Ghana CARES “Obaatanpa” programme, which is a three-year recovery programme to be financed 30 percent by the government and 70 percent by the private sector, aimed to transform, revitalise and modernise the economy.

Underpinning all of this is the will and determination of the general population to “do their part” and shift the national narrative from survival to prosperity and demonstrating building internal resilience on the African Continent brings us closer to an Africa Beyond Aid.”

Mr Ofori-Atta said Africa must focus on enhanced vaccination and Covid-19 protocols indicating as of March 21, Africa’s vaccination per 100 people is 0.6 percent compared to Asia, 3.4; 6.4 for South America; 13 for Europe and 23 percent for North America.

The Executive Secretary of the Economic Commission for Africa (ECA), Dr Vera Songwe said Africa was facing a triple crisis based on climate change, Covid-19 and the economic downturn.

“There is now real momentum for collective action on the SDRs at the IMF and World Bank spring meetings following the recent G7 finance ministers meeting and we welcome this.”

“There has been a decoupling of the world’s response between the advanced and developing countries. Advanced economies reacted swiftly to shore up their economies providing trillion dollars in liquidity. On vaccines, a decoupling in access and finally on fiscal policy. To build forward better and close these gaps, the SDRs provide the key to solutions for emerging and frontier economies,” She added

Dr Songwe said Africa was not out of the response phase yet. It needs liquidity to move from response to recovery and an extension of the DSSI to the end of the year, she said, adding issuance of new SDRs was urgently needed.

“As the developed world transitions from response to recovery, Africa should not be left behind,” she said, adding that the continent’s recovery must be focused on job creation and green jobs.

The increase in poverty may lead to a “lower for longer” poverty traps, compromising past gains. This, Dr Songwe said, meant additional liquidity must make its way to the private sector and small to medium scale enterprises, the engine of Africa’s economy adding that countries must put in place enabling reforms.

According to her, most African countries are projected to lose between 2 and 5 percent GDP to climate change by 2030 in conservative estimates, which is up to nine percent lost in climate-related natural disasters in 2019.

She said ECA estimates between 49 to 161 million Africans have fallen into poverty due to Covid-19 with an estimated 100 million as the most likely scenario.