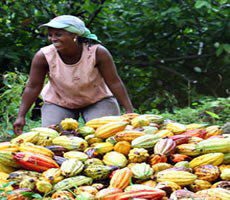 Ghana has attained the unprecedented target of one million tonnes of cocoa production in the 2010/11 cocoa season.

This was confirmed in a statement signed by the Chief Executive of COCOBOD Mr. Tony Fofie.

The unprecedented target is attributed to efforts by government, farmers, COCOBOD and Licensed Buying Companies (LBCs) and other stakeholders.

Below is the full statement released by COCOBOD.

This record production has been as a result of the collective efforts by government, farmers, COCOBOD, Licensed Buying Companies (LBCs) and other stakeholders in the industry through adherence to good agronomic practices, payment of remunerative producer price, application of fertilizers, disease and pest control, use of hybrid cocoa seedlings and scientific research.

Since the liberalization of the internal marketing of cocoa, governments through COCOBOD has implemented pragmatic policies to ensure that Ghana maintains the quality of cocoa it provides to the international markets as well as sustaining the increase of cocoa production. It is through these policies that the one million tonnes target has been achieved.

We take this opportunity to congratulate our hardworking cocoa farmers, LBCs, Hauliers, chemical and processing companies, the national anti-smuggling taskforce, and all stakeholders in the cocoa industry for their relentless efforts that made it possible for COCOBOD to achieve the record level of cocoa production.

Meanwhile, COCOBOD is processing the second tranche of the 2009/10 bonus for payment to farmers.

As we prepare to enter the 2011/12 crop year in October 2011, we encourage all stakeholders to continue to work diligently to enable us sustain the increasing level of cocoa production.