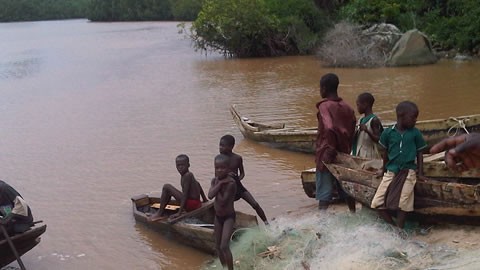 The menace of child labour seeks to jeopardise the wellbeing of many children, whole families and communities. In Ghana, more than one million children are affected.

In 2009, Ghana designed a holistic approach to the problem, setting into motion the implementation of a National Action Plan (NPA) for the Elimination of the Worst Forms of Child Labour. The NPA was endorsed by Cabinet after being developed by a broad-base consultative process involving micro, meso and macro level actors and duty-bearers.

This is one of the most vivid manifestations of the country’s commitment to combat child labour, after the ratification of relevant international conventions such as the United Nation’s Charter on the Rights of the Child (UNCRC) and ILO Conventions on Minimum Age for admission into employment (Convention 138) and Worst Forms of Child labour (Convention 182) in addition to the African Charter on the Rights and Welfare of the Child (ACRWC). In the context of the National Medium Term Development Plan (A.K.A Ghana Shared Growth and Development Agenda-GSGDA), the NPA is the fulcrum that pulls together the various interventions that seek to address the child labour problem.

Progress in Law and its enforcement against child labour: A major intervention is the enforcement of relevant laws to ensure that duty-bearers are adequately resourced to do their work so that perpetrators of child labour are brought to book. Mandated agencies need to have uninhibited access and good knowledge of the relevant laws and a firm grasp of the legal provisions applicable in any given circumstance. Due to the social dimensions of child labour, defining the concept in a manner that helps to operationalize it in practice can be challenging even to the experienced law enforcement agent. This is why pains must be taken to skillfully train law enforcement agencies on the concept of child labour. In addition, there must be effective collaboration and coordination amongst them to avoid unnecessary duplication and unhealthy competition.

In many instances, mandated agencies expected to complement each other are found to be turf-fighting and blame shifting. This is often because of low clarity on their distinct roles and responsibilities and a poor understanding of the areas they need to work together to enhance their mutual effectiveness and efficiency. Thus, partnership and coordination is critical to the delivery of effective law enforcement towards the elimination of the worst forms of child labour.

In this direction, extensive trainings have been held for key law enforcement agencies including the Anti-Human Trafficking Unit (AHTU) of the Ghana Police Service, the Department of Social Welfare (DSW), the Labour department, Ghana Immigration Service (GIS), Domestic Violence and Victims Support Unit (DOVVSU), the Commission on Human Rights and Administrative Justice (CHRAJ) and the Child Labour Unit (CLU). As a result, these agencies have stepped up their commitment towards the implementation of the National Plan of Action, in spite of the critical challenges such as inadequate funding they face in their work.

Tackling the challenges in the legal framework against child labour: In addition to building the technical and logistical capacity of enforcement agencies, the existing laws must be found to be relevant, up to date and consistent with international standards. This is why national laws need to be well informed by international instruments. Hence it is a significant achievement that Ghana has ratified notable international conventions. That the ILO Convention 138, having been in existent since 1973, was only ratified in 2012 in the context of the National Plan of Action, is indicative of how effective the NPA implementation can be.

Moreover, the 1992 Constitution provides clear guarantees for the right of children to be protected from work that threatens their wellbeing. Also, Part five of the children’s Act, 1998 (Act 560) makes provision for the prohibition of exploitative child labour and addresses what is acceptable child work or light work. However, the Act falls short of the detail and procedure prescribed by the Convention No. 182 and its associated Recommendation 190 which provides guidelines for the Worst Forms of Child Labour (WFCL).

Under the National Plan of Action (NPA), there is a call for the review of the Children’s Act to enhance its relevance and effectiveness. Given that the Act was promulgated before the country’s ratification of ILO Convention on the Worst Forms of Child Labour (WFCL), provisions relating to WFCL are woefully inadequate. For example, as was stated in the NPA, “the Children’s Act provides a summary list of sectors inappropriate for children to work, but falls short of the detail and procedure prescribed by the Convention No. 182 and its associated Recommendation 190 which provides guidelines for the determination of the hazardous work framework.

There is, thus, a need to expand on the sectors listed in Section 91(2) of the Act, and to develop a framework that will clearly provide for the identification of hazardous tasks or activities within each of the identified sectors”. Thankfully, as part of the implementation of the NPA, a comprehensive Hazardous Activity Framework (HAF) has been developed and validated by experts and stakeholders; and now waits for its formal adoption by the competent authority. However, additional necessary legal instruments would have to be formulated and enacted if the child labour provisions in the Children’s Act can be fully applied.

For example Legally Employed Children (LEC), that is children who have attained the minimum age of employment (15 years), must be guaranteed the minimum wage from their employers. They must not be exploited because they are children. Also, collective bargaining agreements should be done with a consideration of such children. In addition, legally employed children should enjoy all other rights at work such as the right to associate and medical benefits.

Furthermore, the law should be reviewed to enhance the application of child labour inspection to apprenticeships. The legal framework governing the Council for Technical and Vocational Education and Training (COTVET) should ensure that children in the traditional and informal apprenticeships sector are not subjected to the worst forms of child labour under the guise of apprenticeship training.

There are many “roadside” mechanics and automobile workshops admitting children and exposing them to hazardous activities in the name of training them. This practice should be curtailed in the context of legislation and subsequent enforcement. Other measures needed to be taken include specification of mechanisms for mediating apprenticeship disputes, including possible designation of the District Labour Officer as the first tier of dispute resolution; Incorporation of provisions relating to child labour inspection into the Child Rights Regulations and the revision of the Criminal Code and the Criminal Offences Act, 1960 (Act 29) to include children in illegal mining (galamsey), armed conflict and drug trafficking.

In such criminal circumstances the law must ensure the protection of children from prosecution under laws relating to illicit activities in which they are used by adults. This could include the designation of special courts, dedicated child labour teams and panels in tribunals and other law enforcement agencies for WFCL abuses.

Of particular interest is the need of a comprehensive national legal regime for domestic work. The international community recently adopted the Domestic Workers Convention, 2011 (ILO Convention 189), which seeks to promote decent work for domestic workers. Child labour in domestic work is a hard to reach area because of its relatively low visibility. Child domestic servants are often hidden away from public notice and face very serious hazards and maltreatment. Thus, we need regulation of child domestic employment including, as indicated in the NPA “specification of the conditions under which a child may be employed in domestic service (including the explicit application of the minimum age for employment based on the nature of domestic work in the light of the ILO Recommendation 190), regulation of the practice of fostering to ensure protection of fostered children, hazardous tasks and hazardous work conditions prohibited for children in domestic service, and penalties for breach of such regulations”.

The way forward: If we really intend to reduce worst forms of child labour to its barest minimum by 2015 as indicated in the NPA, all hands must get on deck. We must see child labour for what it really is: a core challenge to the economic and social development of our country; and not a piece of socio-cultural phenomenon for which we are helpless.

In order to expand access to the legal provisions on child labour, it is important to translate the Children’s Act, 1998 (Act 560), Human Trafficking Act, 2005 (Act 694) Domestic Violence Act 2007 (Act 732) and other relevant legislation into braille, audio, visual and simplified versions and their dissemination to schools for the blind and to public libraries.