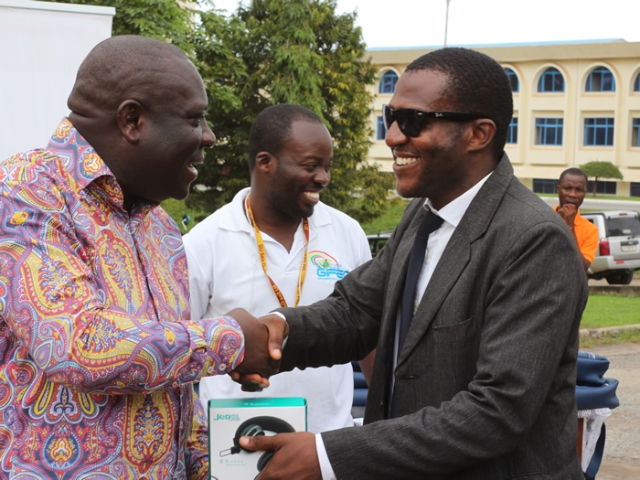 The Ministry of Communications through the Ghana Investment Fund for Electronic Communication has given laptops, accessories and an assistive technology to visually impaired students at the Resource Centre for Alternative Media and Assistive Technology at the University of Cape Coast.

The support comprising thirty laptops was installed with Nonvisual Desktop Access (NVDA) software to help the students with a disability learn with ease and also reduce the cost of their learning materials.

Handing over the items to the centre, Deputy Minister of Communication, Vincent Sowah Odotei, indicated that government was poised to intervene in the life of persons with disability by supporting them in their education.

“This is an assistive technology which translates visual information into forms which are useful to users via non-visual means such as text-to-speech, sound icons or a braille device. In addition, the Resource Centre for Alternative Media and Assistive Technology (R-CAMAT) ICT laboratories have been equipped with ten desktop computers and accessories.

“This will help them to compete effectively in the turbulent job market. It is also the aim of the collaboration to build a ready pool of talents who will serve as facilitators to train others,” he explained.

The Deputy Minister indicates ICT remains a critical component of the world’s economies today and it will remain so for generations to come, having permeated all aspects of human life.

“The education sector is both a beneficiary of ICT and a contributor to its development. In Ghana, we believe that pour capacity to compete in the global market greatly depends on the ability of our people to innovate and apply the relevant technology for growth and development,” he stated.

Vincent Sowah Odotei explained the government is committed to pursuing an aggressive technology drive in the country.

According to him, at the commencement of the administration New Patriotic Party (NPP) and as part of government’s digitization agenda, there has been a massive roll-out of a number of ICT initiatives in key government institutions aimed at improving efficiency and service delivery.

“Government has embarked on numerous ambitious digital initiatives which are the most innovative digital transformation in the history of our country. These include the National Property Addressing system, the National ID Card, the paperless port, Land Record Digitization and Mobile Money Interoperability System and I am proud to say that indeed these are yielding positive results for the nation,” he averred.

The program, according to him, targets to deliver over 1,000 digital learning devices to persons with special needs and ultimately socialize our learners with digital learning.

“The program promises to technologically equip the visually impaired to reduce reliance on manual braille devices. I am happy to mention that the first beneficiaries of this initiative are members of the Association of Persons with Disabilities here at the University of Cape Coast,” he stressed.

Vice Chancellor of the University of Cape Coast, Prof. Joseph Ghartey Ampiah, thanked the Ministry of Communication and GIFEC for their contribution to the University. He called for more support for the persons with disability to reduce the burden on them in their education.

President of the Visually Impaired Students, Caruthers Tetteh, called on the government to make good its promise for the people with disability to expedite action on the full implementation of the disability policy.

He says the full implementation of the law will help a great deal in the lives of persons with disability.