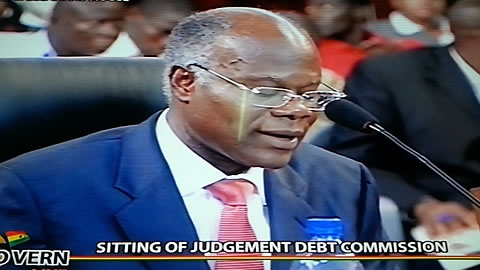 Member of Parliament for Adansi Asokwa  Kobina Tahir Hammond has in a rather emotional fashion argued his innocence before the Judgement Debt Commission charged among other things, to investigate how an  oil drill ship belonging to Ghana National Petroleum Commission (GNPC) was controversially sold in 2001.

The document, which he claimed was God sent to vindicate him, was dropped mysteriously into his pigeon hole in Parliament. He did not know who dropped it but stated the document contained "shocking" revelations about how proceeds from the 3.5 million dollars were withdrawn and disbursed from government of Ghana account held in UK.

He told the Commission his mother in the village is dying because he had been wrongly accused in the media of embezzling the 3.5 million dollars when all he had done, was to offer diligent and selfless service to his country and the GNPC.

The sale of the Oil Drill ship belonging to the GNPC had been an object of controversy and a subject of inquiry by the Sole Commissioner appointed by President John Mahama to investigate all judgement debt cases in the country.

The John Agyekum Kufuor government, which superintended over the sale had been accused of legal and procedural breaches by not consulting the Board of the GNPC which had the legal mandate to sell.

But Hammond vehemently and emotionaly pleaded his innocence.

Facts of the case

Prior to his appearance, his boss Kan Dapaah, had early on taken the Commission through the circumstances surrounding the sale of the oil drill ship.

He told the Commission that GNPC, under the leadership of Tsatsu Tsikata decided to fund all its oil exploration activities so that in the event Ghana struck oil, all the proceeds will remain in Ghana.

As a result of that policy, GNPC undertook commercial activities and financial engineering programmes to raise funds for the expensive exploration activities.

He said one of the arrangement was the hedging facility with French Bank Societe General which began from 1987 to around 1998. The hedging was entered into with the projection that by 1998 oil will be struck in the Tano Basin, but the 1998 projected date came with no success in oil find. GNPC was then saddled in debt.

According to him, a debt of 40 million dollars had been incurred as a result of the transaction with Societe General with accruing interest.

The Bank then sought a UK court judgement asking GNPC and the government of Ghana to pay the debt.

Kan Dapaah told the Commission that the Kufuor government which inherited the mess at the GNPC decided to negotiate a settlement with Societe General and not to litigate the matter.

It also decided that the cost of oil exploration should be borne by the private investors and not by GNPC or government. Kan Dapaah noted therefore that marine assets owned by GNPC should be sold.

He also explained that KT Hammond was delegated by Cabinet to, on behalf of the government of Ghana negotiate a deal with Societe General.

Kan Dapaah indicated that GNPC had already mortgaged the drill ship as a collateral for a loan based on which Societe General procured an order from an Omani court to have the ship sold.

Societe General effectively did not need the permission of the Government of Ghana to sell the ship, he noted.

He explained however that the ship was later sold at a cost of 24 million dollars, 19.5 million of which was used to settle the negotiated agreement with Societe General.

When KT Hammond took over, he lamented to the Commission, how some newspapers had unjustifiably maligned him and his boss in the controversial drill ship saga.

He then explained how he, with the authority of the Kufuor cabinet, negotiated a settlement with Societe General.

He said after the ship was sold at a cost of 24 million dollars, 19.5 million was used to pay the settlement agreement with Societe General.

Out of the remaining 4.5 million dollars, one million dollars was used to pay for debt incurred through litigation as well as other expenses incured by the GNPC.

He provided as exhibits to the Commissioner a letter, he claimed was written by GNPC detailing who were owed and who deserved to be paid.

KT Hammond said after all the debts had been cleared the remaining 3.5 million dollars was handed over in cheque to the acting Ghana Ambassador to the UK, Chris Kpodo who then paid it into the Ghana government account in the UK.

Contrary to claims by officials of the Bank of Ghana and others that there was no official document supporting the payment of the 3.5 million dollars and how it was subsequently disbursed, KT Hammond presented the document, he insisted had been put into his pigeon hole, a document which he claimed exonerated him and held all the answers to the mysterious 3.5 million dollars.

Sealed in a brown envelope, the Judge Yaw Apau gave back the document to Hammond to open it himself, excaliming in a rather, humourous manner that it may well be that the document contained an explosive.

Hammond opened the document and offered as evidence on how the money was expended.