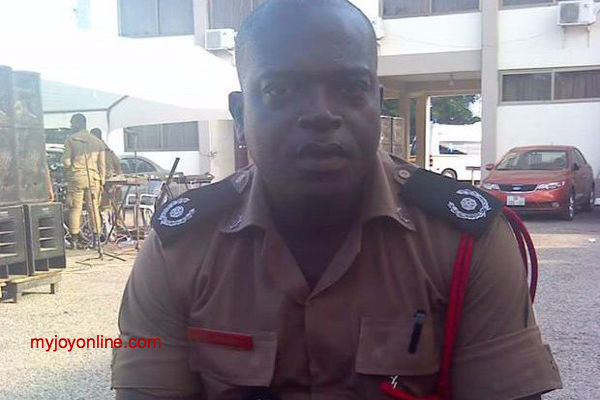 The Techiman Circuit Court has adjourned sitting on the case of the embattled Municipal Fire Commander whose manhood was reportedly bitten.

Philip Ansah Andoh's manhood was allegedly bitten by a 24-year-old community fire officer, Ataa Takyi, who said he attempted to forcibly sleep with.

The Court presided over by Her Lordship Juan Eyi Kin has asked the accused to reappear before the court on October 27.

Miss Takyi was however not spotted in court for the second time and there has not been any explanation from the prosecutor why she has failed to make it to court.

Narrating what happened, she said she answered after a knock on her door only to see Mr Ansah Andoh standing there with a large plastic bag.

She told reporters when she inquired what why he was there at that time of the night, the officer told her that he was brought her some dirty clothes to wash for him.

According to Ms Takyi, when she collected the bag and turned to enter her room, the fire chief followed her and sat on one of the chairs in the room.

She said when she asked him to leave the room because she was going to bed, her boss refused to do so.

Instead, the lady claimed the officer began fondling her breasts and pulling her cloth.

“I resisted initially and later he threatened me saying he is the commander and so anything he wants he gets it; and because he said that I got scared he would do something bad to me,” Miss Ataa narrated.

“Being afraid of losing my job, I decided to give in with a different motive to defend myself.

“I told him I am ready and so he should do whatever he wants to do with me; but after romancing with him for three minutes, I grabbed his penis and bit it hard,” Ms Tayi said.

She said the officer collapsed as blood was oozing from his manhood.

She said she realised he was bleeding and feared he could lose his life and therefore called for help, adding that Mr Ansah  Andoh was taken to the Dr Kesse Hospital at Techiman for medical attention.

He was treated and discharged.

However, the embattled fire commander explained that Ms Takyi has been his girlfriend for the past three to four months and so "there is no way I would rape a woman am going out with."

Mr Ansah Andoh stated that contrary to claims by the lady that he visited her after midnight and tried raping her, he never did such a thing.

"It's a routine visit as I took my clothes to her to wash," a surprised at Mr Ansah Andoh said still wondering what led to her reaction that night.

The fire officer has been suspended over the alleged sexual escapade.

The police has however presented the case to the Attorney General's office seeking advice after it finished its preliminary investigations.