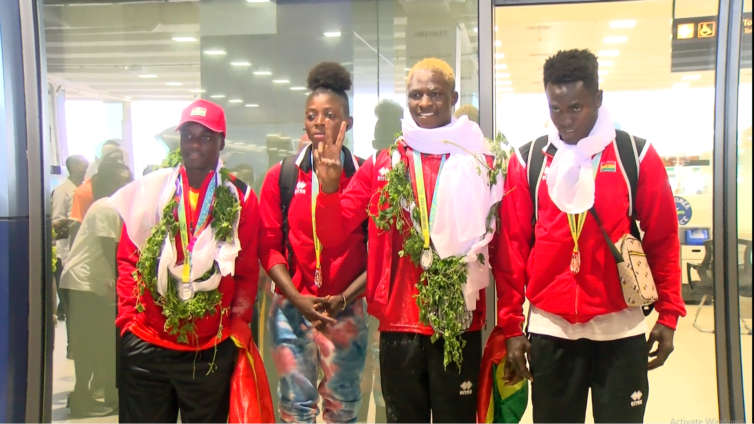 The Ministry of Youth and Sports (MoYs) has rewarded medal-winning athletes, boxers, and coaches for their efforts at this year’s Commonwealth Games in Birmingham, Joy Sports has gathered.

Abraham Mensah who won the country’s only silver medal in the Games after losing his bantamweight contest final to Northern Ireland’s Dylan James Eagleson, received $5,000 while his teammates, Joseph Commey and Wahid Umar, who both won bronze in boxing, were given $3,000 each, per Joy Sports sources.

The three technical team members of the Black Bombers led by Ofori Asare were given $2,000 each.

For the field and track athletes, sprinter Joseph Paul Amoah, and long jumper Deborah Acquah, were given $3,000 each for the success in their events.

Paul Amoah won bronze in the men’s 200m final, the country’s first medal in the event since George Daniels’ silver at the 1974 Commonwealth Games in Christchurch, New Zealand.

Ms Acquah, the national record holder, leaped 6.94 metres to finish third during the games. She became the first woman to win a medal at the competition in her event.

However, the track and field coaching team, led by former sprinter Leo Myles Mills, has not been remunerated.

Sources say the decision not to reward them is because of the “technical oversight” that led to the disqualification of the men’s 4×100 relay team.

Ghana was disqualified for a technical violation after coaches failed to inform officials of their decision to replace Joseph Paul Amoah with Abdul-Rasheed Saminu for the relay heats race.

The Sports Minister, Mustapha Ussif,  demanded an explanation from Ghana’s International Games Committee and Chef De Mission for the disqualification of the men’s 4×100m quartet after the Ghana Athletics Association issued an apology after the incident.

The transgression has now led to the coaches being punished despite winning two bronze medals.

GAA submitted its report to the ministry, Chef De Mission, and chairman of the International Games Committee last week.

Despite the unfortunate disqualification of the men relay team, many are of the opinion that the coaches worked to get two medals in two separate events and be appreciated for the effort.