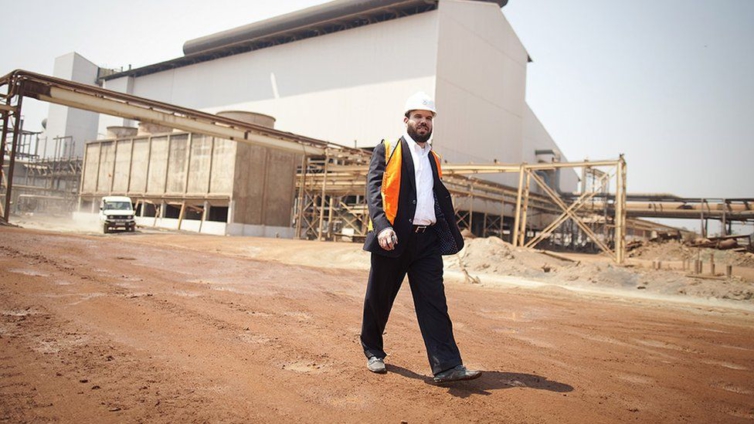 Dan Gertler, pictured at a mine in the Democratic Republic of Congo in 2012, was initially sanctioned in 2017

The Biden administration recently re-imposed sanctions on Israeli businessman Dan Gertler over alleged massive corruption in the Democratic Republic of Congo’s lucrative mining business. Journalist Franz Wild reports on his remarkable rise, and his alliance with former President Joseph Kabila which even saw him being appointed a Congolese diplomat.

When the United States initially imposed sanctions on the mining magnate in 2017, he hired President Donald Trump’s lawyer to get them removed.

The sanctions had been introduced for his allegedly corrupt relationship with DR Congo’s former President Joseph Kabila, helping him make a vast fortune from copper and cobalt deals in the country, something both men deny.

A spokesperson for Mr Gertler has said that the allegations “have been unfairly and wrongly levelled against [him]” adding that “there is not a shred of reliable evidence with which to support them”.

Over two decades, Mr Gertler, still only 47, became one of DR Congo’s most powerful businessmen.

He held sway over which multinational mining companies were lucky enough to mine the country’s extraordinary reserves of copper, cobalt, tin, gold and diamonds. On occasion, Mr Gertler also became a key diplomatic emissary for Mr Kabila.

In its final days, the Trump administration granted Mr Gertler a so-called sanctions licence, which gave him access to his frozen funds and the international banking system for a year.

In March, however, his fortunes reversed with dramatic speed.

After an outcry at the sanctions licence from anti-corruption campaigners, members of the US Congress and former State Department officials, Mr Gertler became an early example of President Joe Biden’s stated commitment to a principled foreign policy, including cracking down on international corruption. The administration withdrew the licence.

Mr Dershowitz complained that the US had withdrawn the sanctions licence “unilaterally”, without giving Mr Gertler an opportunity to prove that he was living up to the commitments he had given to allow an outside monitor to observe his business and to report his financial dealings.

The power and influence the businessman wields and the symbolism of the sanctions were captured by the US statement.

Sanctions were necessary “to counter corruption and promote stability in the Democratic Republic of the Congo”, Mr Price said.

“The United States will continue to promote accountability for corrupt actors with all the tools at our disposal in order to advance democracy, uphold international norms and impose tangible costs on those who seek to upend them.”

In DR Congo, Mr Gertler acted as a middleman between the country and multinational companies and also managed companies on behalf of Mr Kabila, according to the US sanctions announcement. Now that President Félix Tshisekedi, in power since 2019, is gradually wresting Mr Kabila’s control over DR Congo’s political establishment, the US wants Mr Gertler contained too.

In 2000, when civil war risked ending Kabila’s reign as suddenly as it had begun, Mr Gertler promised millions of dollars and, according to a United Nations report, access to arms – the two things that could best help the new leader stay in power. In return, he received a monopoly on DR Congo’s substantial diamond exports.

Mr Gertler gained the trust of the younger Kabila, who took over as president when his father was assassinated in 2001.

Engaged in war with US ally Rwanda, the young leader sent Mr Gertler to Washington to ask for President George W Bush’s backing.

After lengthy discussions with Mr Gertler, the Bush administration agreed to support President Kabila, helping pave the way for a peace deal between the warring parties and entrenching Mr Kabila’s rule.

Companies controlled by Mr Gertler started sweeping up licences for mineral deposits all over the country.

Though the mining operations Mr Gertler pursued on his own were not hugely successful, it was not for want of trying.

He once sent helicopters carrying drill rigs deep into the Congolese jungle in search of iron ore. It turned out the project would have been far too expensive and complicated to be worth it.

Before Och-Ziff invested with Mr Gertler, it commissioned a review into how he conducted his business.

He “has been willing to use his significant political influence with [Mr Kabila]… and his clique to facilitate acquisitions, settle disputes and frustrate competitors”, Och-Ziff was told, according to the US Justice Department which later accepted a guilty plea and a fine from Och-Ziff for corruption offences.

Mr Gertler and Mr Kabila’s names were anonymised in the Justice Department announcement, but their identities were separately confirmed.

In its deal with the Justice Department, Och-Ziff accepted that Mr Gertler had in fact paid at least $100m in bribes in DR Congo, something Mr Gertler denies.

He became one of Israel’s wealthiest men and built an opulent triple-storey home with a wood-panelled lift in a poor neighbourhood outside Tel Aviv. He said he felt most at home there embedded in a Jewish community which shared his religious devotion.

Over time, questions grew around the deals Mr Gertler was making and he invited journalists to see for themselves how his projects were benefitting DR Congo, even if the details relating to the allegedly corrupt deals were not explained.

His website states that “he has always seen his mission as being to help the DRC recover from [its] long period of destruction and build a lasting, sustainable economic recovery”.

At a copper and cobalt project in southern DR Congo in 2012, Mr Gertler gleefully jumped behind the steering wheel of a bus to take visitors to a spot where the dry woodland had been cleared for an open pit mine and enormous processing machinery.

Swerving along the dirt track Mr Gertler waved around him. “It was jungle here,” he boomed through the bus’s public address system. “Jungle, jungle, jungle. I said: ‘Guys, this is my baby, you have to find the copper.'”

That particular deposit did not yield much, but Mr Gertler was a beneficiary of some of DR Congo’s biggest copper and cobalt mines.

Life under a new president

And the questions only grew.

The Och-Ziff case added detail to the allegations against him.

A report commissioned by the Africa Progress Panel said DR Congo had lost at least $1.36bn in deals Mr Gertler was involved in between 2010 and 2012 alone. And the US imposed sanctions.

Despite his travails, Mr Gertler’s private jet has continued its regular trips to DR Congo.

While Mr Gertler’s sanctions waiver did not last long, it is likely that it allowed him to sort out at least some of his financial affairs. A much bigger challenge will be preserving his dominance in DR Congo, where he has so far remained untouchable.

Since assuming power two years ago, President Tshisekedi has gradually choked off his predecessor’s powerful influence.

In recent weeks, Mr Tshisekedi has brought in loyalists to head his government and parliament. For many Congolese, Mr Gertler embodies the corruption of the Kabila years. Whether Mr Gertler can remain influential under the current president could become his biggest challenge yet.