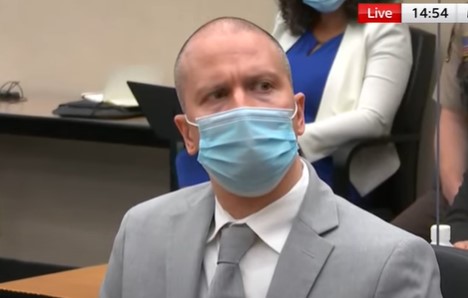 Former US police officer Derek Chauvin has been jailed for 22-and-a-half years for murdering George Floyd in Minneapolis last year.

Chauvin, 45, was convicted of second and third-degree murder and manslaughter in April in a case that made global headlines and sparked protests.

Video showed the white police officer had his knee on the neck of Mr Floyd, a black man, for more than nine minutes while arresting him on 25 May 2020.

Mr Floyd was being arrested on suspicion of using a fake $20 note. He was handcuffed, restrained, and repeatedly called out “I can’t breathe” before he died.

“I want us to continue this fight and not give up.

She said she had lived the past year “paralysed in grief”, adding: “It has been hard for me to get by day to day”.

“I know people are angry – I hear it and I understand. But Floyd is not about violence…he’d want everyone to just keep fighting the right way.”

When asked if the sentence had brought her a sense of closure, she said: “It doesn’t. I believe this is more for a greater good. For our personal grief, it doesn’t stop.”

Earlier, Judge Peter Cahill had gone beyond the 12.5-year sentence prescribed under state guidelines, citing Chauvin’s “abuse of a position of trust and authority and also the particular cruelty” shown to Mr Floyd.

He said the sentence was not based on “emotion or sympathy” or on “public opinion…or an attempt to send any messages”.

But he added: “At the same time, I want to acknowledge the deep and tremendous pain that all the families are feeling, especially the Floyd family. You have our sympathies.”

The case re-energised the Black Lives Matter movement, with protests across the US and in other countries against racial inequality and police brutality.

Fewer than a dozen police officers have been sentenced for an on-duty murder in the US in the last 15 years and Chauvin is the first white police officer in Minnesota to be convicted of killing a black man.

The three other officers who encountered Mr Floyd that day are facing trial in August.

They and Chauvin also face federal charges of depriving Mr Floyd of his civil rights and a conviction carries a possible death sentence.

It is for this reason that, when Chauvin briefly addressed the court after more than a year of silence, he said little about what had happened to Mr Floyd and his part in it.

He offered condolences to the Floyd family and said he hopes more information coming out will eventually give them “some peace of mind”.

Earlier members of both families had spoken to the judge about their experiences and what they thought would be an appropriate sentence for the former police officer.

Terrence Floyd, one of Mr Floyd’s brothers, said: “We don’t want to see no more slaps on the wrist. We’ve been through that already.”

Chauvin’s mother, Carolyn Pawlenty, said her son’s reputation had been unfairly reduced to that of “an aggressive, heartless and uncaring person” and a racist.

“I can tell you that is far from the truth,” she told the judge.

“I want this court to know that none of these things are true and that my son is a good man.

“Derek, I want you to know I have always believed in your innocence, and I will never waver from that.”

US President Joe Biden was asked to comment on the sentence. He said it, “seemed to be appropriate” but that he did not have all the details.

DISCLAIMER: The Views, Comments, Opinions, Contributions and Statements made by Readers and Contributors on this platform do not necessarily represent the views or policy of Multimedia Group Limited.
Tags:
Black Lives Matter
Derek Chauvin
George Floyd
Racism