DR Congo conflict: Hiding on top of a hill to escape the rebels 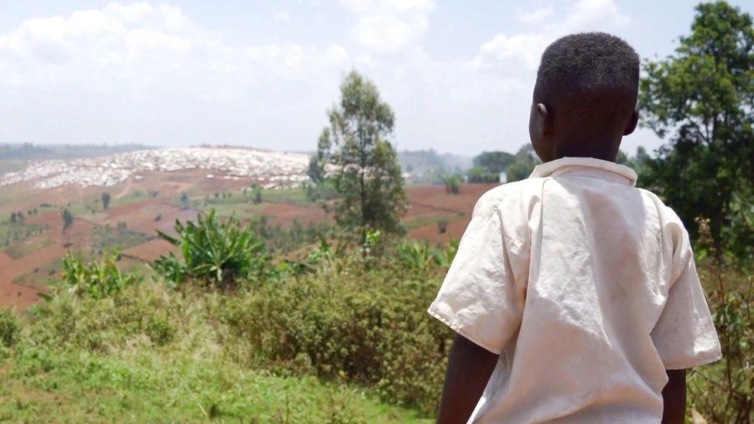 Tens of thousands of displaced people have gathered for safety on a remote hilltop in Ituri province in eastern Democratic Republic of Congo.

They are seeking refuge from the persistent, violent attacks that have ravaged the region for decades.

Amidst the chaos are children who have been orphaned, forced from their homes, and made to witness horrific events.

Among those living in the hillside camp is a 14-year-old boy who arrived there alone after fleeing an attack. We’re calling him Blukwa to protect his identity.

Blukwa and his family had already run away from his home twice when an armed group attacked the camp they were living in.

“I was playing with my friends and I didn’t know where my parents had fled,” he said.

When the attack began, he and a friend ran to find safety, but his friend fell behind and was caught and brutally killed.

“I continued to run alone,” he said.

That attack left at least 12 dead, including six children.

After the attack, Blukwa made his way to the hillside camp alone.

He lived for weeks with another displaced family who took him in, until he was reunited with his family.

His mother, who had been told he was killed in the attack, was elated to see him still alive.

“I found out that it was his close friend [who was killed]. I was very happy to find my son,” she said, her voice full of emotion.

According to the United Nations, some six million people have been forced to flee their homes in DR Congo.

That is one of the largest populations of displaced people in the world, alongside places like Afghanistan, Yemen, Syria and Ukraine.

Most of the displaced are in the eastern provinces of South Kivu, North Kivu and Ituri.

There you will find rows of abandoned camps for displaced people, deserted due to attacks by armed groups – attacks which happen so often they have almost become routine.

Eastern DR Congo is home to hundreds of different armed groups, who have wreaked havoc in the region for almost 30 years. Among the most notorious are Codeco, M23 and the Islamic State-affiliated ADF.

The conflict is fuelled by a complex web of factors including ethnic disputes, political instability, and the battle for the country’s vast mineral wealth.

Neighbouring countries like Rwanda have been accused of conspiring with some rebel groups but Rwanda has denied this.

Business interests have also been blamed for fuelling the violence.

Last month the United States sanctioned Belgian gold dealer Alain Goetz and a number of associated companies for allegedly smuggling hundreds of millions of dollars’ worth of gold out of DR Congo.

The US said this illicit trade was funding armed groups threatening peace and security in the country. Mr Goetz denied the claims.

In an effort to curb the violence, DR Congo’s President Félix Tshisekedi declared a siege, essentially martial law, in North Kivu and Ituri nearly a year ago.

However, this has done little to suppress the unrest in the region.

In recent weeks the attacks have escalated, prompting a new wave of people to flee their homes.

Dozens of civilians have been killed, as well as government soldiers and nine UN peacekeepers.

Amid the escalating violence, the head of Unicef, Catherine Russell, visited Blukwa’s camp in Ituri.

She described the shock of seeing the sprawling camp in the middle of the verdant, hilly landscape as she flew in.

“The camp is huge and is in such a remote area, but that was purposeful because everyone thinks it’ll be safer and further away from the groups who could attack it,” she said.

Up to 50,000 displaced people now reside at this camp where water is scarce, there is limited sanitation and no access to healthcare. The conditions are dire, but leaving carries an even greater risk. Even leaving to look for food growing in the surrounding hills can be a death sentence as armed groups are known to attack those who venture too far, despite the presence of UN peacekeepers at a nearby base.

But amid the chaos, Blukwa still finds time to live out his childhood.

“When I’m free, I go play football,” he said. “We collect the bags and ropes to make a football. Sometimes we also play card games.”

His dream is to one day become a doctor.