Drake self-isolates after partying with Kevin Durant before coronavirus diagnosis 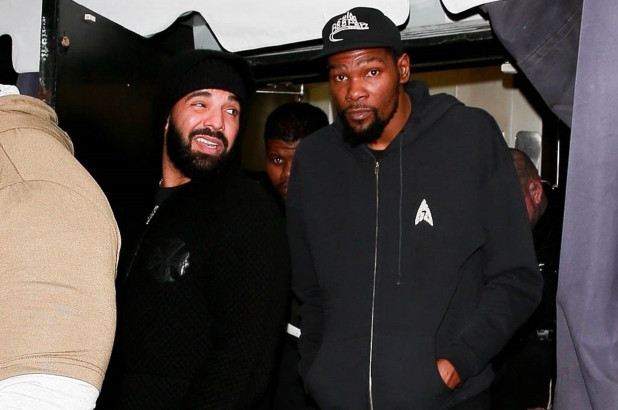 Drake is self-isolating at his mansion in Toronto after partying with Nets star Kevin Durant just days before Durant was diagnosed with coronavirus, Page Six is told.

The pals hung out at West Hollywood hotspot Nice Guy eight days ago, with Drake posting a photo of their night out.

The Nets were in LA to play the Lakers. Durant, who’s recovering from a torn Achilles tendon, did not play — although he did make the trip out West.

Drake posted a video from his home basketball court, saying: “My life for the next however long.”

Canadian Prime Minister Justin Trudeau this week announced he was closing the country’s borders to foreigners apart from US citizens — and on Wednesday, President Trump said the US and Canada are working together on an agreement to suspend non-essential travel between the two countries while sparing trade.

So it looks like Drake will be at home for quite a while.

A total of four Nets players have tested positive for coronavirus, the team said in a statement, with only one currently showing symptoms.

“All four players are presently isolated and under the care of team physicians,” the team said.

“The organization is currently notifying anyone who has had known contact with the players, including recent opponents, and is working closely with state and local health authorities on reporting. All players and members of the Nets travel party are being asked to remain isolated, closely monitor their health and maintain constant communication with team medical staff. The health of our players and staff is of the highest priority to the organization and the team is doing everything within its power to ensure that those affected receive the best care possible.”