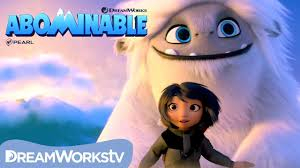 Vietnam’s largest cinema chain has pulled a new Dreamworks animated movie from theaters because it features a map asserting Chinese ownership over the South China Sea.

“Abominable” is an animated film about a young Chinese girl who embarks on an elaborate trip across China to return a magical Yeti, named Everest, to the Himalayas. The movie is a joint collaboration between Dreamworks Animation and Shanghai-based Pearl Studios in China, and is voiced predominantly by actors of Asian ancestry.

In a scene close to the start of the movie, the main character, Yi, goes to her rooftop hideout in which she has spread out a map of China.

Clearly visible on the map is a U-shaped dotted line stretching from China’s southern coast and encircling almost all of the South China Sea.

The nine-dash line, which denotes China’s unilateral claim to the potentially mineral-rich area, is official Chinese government policy and features on all maps sold inside China.

But the line is disputed by at least four other countries in the region, including Vietnam, which says it overlaps with its own territorial claims under international law.

‘Abominable’ was released on October 4 in Vietnam but shortly after state media said that complaints had begun to roll in from viewers. In Vietnam the nine-dash line is referred to as the “ox’s tongue line.”

CGV Cinemas said it only found out the film featured the controversial map on October 13, and immediately pulled all screenings and advertisements.

In a statement Monday, CGV Cinemas said that it had been negligent during the film’s release. “CGV sincerely sends deep apologies to Vietnamese audiences and will comply with direction from the national regulatory authority,” the statement said.

In 2016, an international court dismissed China’s expansive claims to the South China Sea and ruled the nine-dash line as legally invalid.

China’s claim to the waterway has become a delicate issue for businesses and government agencies operating in the region — fail to include the nine-dash line on maps of China and face criticism from the Chinese government; include it and risk upsetting neighboring countries.

In Vietnam, Chinese tourists have faced backlash over the territorial claims. In 2018, a group of 14 people were allegedly asked to remove t-shirts showing a map of China which including the controversial line.

Two years earlier, a Chinese man alleged his passport was defaced with a profanity by a Vietnamese border control official. Since 2012, all new Chinese passports have featured the nine-dash line.