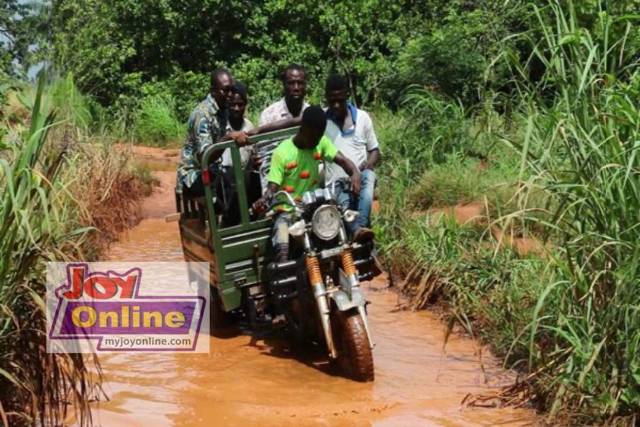 Large tracts of harvested maize are wasting away in farming communities in Ejura Sekyeredumase in the Ashanti Region because bad roads have completely cut off farmers from the market.

The situation has been worsened by recent heavy rains in the municipality. Maize farmers in the community were hit by severe losses from a fall armyworm invasion last year.

Their prayer for rain this year has brought a great maize harvest but the produce is rotting on their farms because roads have become unmotorable with the rains.

Drobong is one of the major maize growing community in the Ejura Sekyedumasi Municipality of the Ashanti Region.

Between five and eight trucks full of maize are conveyed from the community every day to various parts of Ghana. But this number is reducing.

Kwame Tuffuor is a maize buyer and supplier to customers in Kumasi, Takoradi, Accra and other parts of the country. His double axel tipper truck has been in Drobong for almost a month. It is unable to convey the harvested crops to its destinations because of the bad roads.

”My truck has been here for a month, we have loaded for Accra but we can’t cross to even Sekyere Odumase.

Deep gullies are visible in most of the roads, making it difficult for trucks to ply. Some farmers are forced to fix portions of the road with shovels and rudimentary tools en route to their farms.

They cut down coconut trees, trim them, and then fixed them in the places where the flood is ankle to facilitate their movement.

One of the farms cut off from the community belongs to 30-year-old Rockson, a young hardworking maize farmer who cultivates a 50-acre land.

He has a bumper maize harvest ready for transportation to the nearest market but that will not be possible.

“We spent close to 1,500 to till an acre; harvesting, gathering and transportation all part of the cost. Look, it’s all here; there is no tractor to carry from the farm.

“We spend a lot to get the maize ready for sale. Unfortunately, there is no one to buy. We’ll benefit greatly if government construct our roads for us,” he said.

He shares a border with 38 years old, Vasco Osei, who cultivates more acreage than Rockson. He owns 70 acres maize farm.

Vasco prayed for rains but it seems he has had too much of it so worried the rains will not stop now.

Vasco says listening to the weather forecast these days scares him because they are projecting more rains in weeks ahead. Their investments could go waste if nothing is done about it.

Rockson is convinced a barn could help in the interim.

“But the barns are becoming difficult to build because most of the farmers have spent all their money on the farm. The second planting season is starting this month but we don’t know what to do,” said Rockson.

This is worrying because the second planting season is just days away.

Currently, a sack of maize is GHS180 (about $40), however, the current situation if not addressed means, farmers may be forced to sell at a lower price.

Those who are unable to sell will watch their maize rot on their farms.

This trend is evident in many farming communities during this raining season.

With the devastation caused by fall armyworm last year, if roads to farming communities are not fixed and prioritized, food security will be threatened.