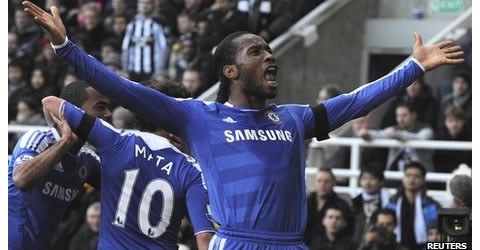 Ivory Coast striker Didier Drogba confirmed his switch to China’s Shanghai Shenhua on Wednesday, a move which will reunite him with former Chelsea teammate Nicolas Anelka.

Drogba announced he would leave Chelsea days after scoring the penalty which beat Bayern Munich in last month’s European Champions League final, and the 34-year-old has signed a two-year deal to become the Chinese Super League’s latest high-profile star.

“I have considered all the offers I have received in the past few weeks, but feel that Shanghai Shenhua FC is the right move for me at this time,” said Drogba in a statement released through his representatives.

“I am looking forward to a new challenge, to experiencing a new culture, and I’m excited about the new developments in the Chinese Super League.

“I hope to help promote Chinese football around the world and further improve the links between China and Africa.”

Former France international Anelka made the move from Stamford Bridge to Shanghai in January and even had a brief spell as the team’s coach following Jean Tigana’s exit in April.

Former Argentina coach Sergio Batista is now in charge of the team, and he is looking forward to working with former Marseille star Drogba.

“Drogba is a very good soccer player, his outstanding skills and amazing experience will give us motivation to improve our games,” said Argentina’s 1986 World Cup winner.

“It is my honor to invite him to join in our team. At last I have to say that the club owner Zhu Jun did his utmost to bring Drogba to Shenhua.”

Shanghai is currently 12th in the league, with only three wins all season. But Shenhua owner Zhu is confident Drogba can have a positive impact on results as he seeks his first title since taking over in 2007 — and the club’s first since 2003.

“We have been wanting to sign Didier for a while, and are very happy that it has finally happened,” said Zhu.

“He is an incredible player, who has won so many trophies in his career, we feel that his experience and ability will be a very valuable asset to our squad.

“Shanghai is one of the most influential cities in the world, and we are very excited to welcome Didier here.”

Drogba and Anelka are two of a number of soccer stars to have joined China’s premier football competition.

Italy’s World Cup-winning coach Marcello Lippi is now in charge at Guangzhou Evergrande, an ambitious club who in the last year have signed Argentine Dario Conca and Paraguay’s Lucas Barrios.