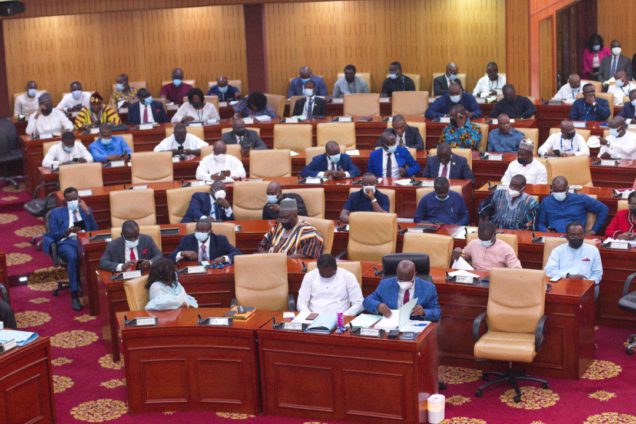 Parliament will resume sitting today to decide whether the controversial E-levy Bill should be considered under a certificate of urgency or otherwise after the House broke into chaos yesterday.

According to sources, both sides of the House will deliberate over the matter at 9am.

On Monday night, a head count to consider the Bill under a certificate of urgency turned into a scuffle when the Minority MPs attempted to stop First Deputy Speaker, Joseph Osei Owusu, who was presiding over the House, from vacating his seat to participate in the voting process.

Infuriated by this action, the Majority side clashed with the Minority at the Speaker’s table. As a result, the House could not take a decision and proceedings were adjourned.

According to the Majority leader, Osei Kyei-Mensah-Bonsu, his side of the House has engaged with the Minority following the fistfight and indications show Parliament will be able to take a decision over the E-levy Bill on Tuesday.

“We have been engaging the leadership of the Minority Caucus after what happened in the Chamber. So I believe by tomorrow [Tuesday] this storm will subside, and we will be able to work and deal with the substance of the matter,” he said.

Meanwhile, the Majority leader has provided justification on why Mr Joseph Osei-Owusu had to leave proceedings in the hands of the Second Deputy Speaker, Andrews Asiamah Amoako.

The Suame MP stated that the First Deputy Speaker excused himself to take his medication and not to participate in the voting process as alleged by the Minority.

“Is it the case that a speaker can’t even excuse himself to visit the loo? Is it the case? The man was indisposed. He was shivering. And he went to the clinic, the record is there. So we had to persuade him to come and sit. He was in the chamber and he was shaking like a leaf,” he told JoyNews’ Parker-Wilson.