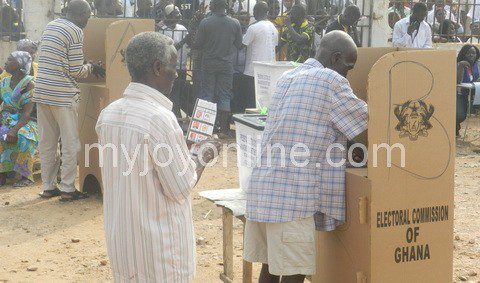 The Electoral Commission (EC) is considering barring political parties without offices across the country from participation in the 2016 general elections.

The Constitution stipulates that all political parties must have at least offices in two-thirds in all 216 districts in the country.

The EC is set to embark on a nationwide inspection of offices of political parties and establish whether they meet that constitutional requirement.

Information available to Joy News suggests the EC will use the outcome to determine qualification of parties to contest in the 2016 election.

The National Democratic Party (NDP) and other smaller parties have been fingered for possible refusal to contest the Presidential and Parliamentary elections next year.

Even before the EC begins the inspection process to establish if the political parties meet the constitutional requirement, Minority Leadear, Osei Kyei-Mensah Bonsu, has raised issues about the EC’s commitment to the process.

According to him, even before the EC granted certificates to parties to operate, they should have ensured that the parties have met the constitutional requirement.

“There are many political parties that exist only on paper which do not even have offices in any district in the country and which otherwise should not be given the certificate to operate or purport to operate,” he the Minority Leader said.