Economy will not be in crisis if Minority, Majority deadlock over 2022 budget lingers - Mahama Ayariga - MyJoyOnline.com

Economy will not be in crisis if Minority, Majority deadlock over 2022 budget lingers – Mahama Ayariga 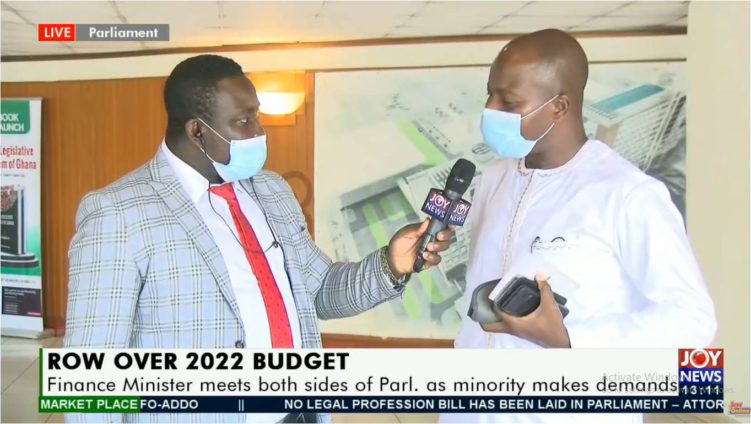 Bawku Central MP, Mahama Ayariga has dispelled claims that the deadlock between the Minority and the Majority Caucuses over the 2022 budget will cause an economic downturn in the country.

Speaking to JoyNews‘ Kwesi Parker-Wilson, the NDC MP said that the 1992 Constitution allows the President to make arrangements with Parliament regarding public expenditure in such situations.

According to him, arguments suggesting that Ghana’s economy will experience a shrink because of the deadlock is a deliberate attempt to cause public disaffection for the Minority Caucus.

“Article 180 of the Constitution makes provision for some arrangement to be made by the President and Parliament for salaries to be paid and for all the government expenses to be catered for. The arguments out there that disagreeing with some key issues in the budget amounts to an attempt to cripple the economy are just propaganda to cause public disaffection for the Minority,” he said.

“Under our Constitution, if the budget cannot be approved on time, the President can make arrangements to continue to pay workers and to pay for all government expenses until a budget is agreed on at least for the next three months,” he continued.

He said that the disagreement between the two sides of the House would have been a matter of concern if “we were in March, 2022, but being in December, 2021, I don’t think that there is an issue about workers being paid.”

Whilst admitting that discussions are ongoing between the two parties, he would not say if any agreements had been reached so far.

Mahama Ayariga said the House is waiting for the government to present a revised budget for consideration.

“If they bring a new budget which is at least progressive, meets Ghanaians at a certain point, based on the sentiments from our constituents, we will decide how to proceed,” he said.

The vote to reject the budget was done in the absence of the NPP MPs as they had staged a walkout.

The Speaker, Alban Bagbin, said that their absence could not prevent the House from proceeding with the business of the day.

That is the first time in the fourth Republic that a budget has been rejected.

Before the vote for the approval or otherwise of the budget, the Finance Minister appealed to the Speaker to allow him to further engage the leadership of Parliament over the budget. But the appeal was turned down by the MPs through a voice note.