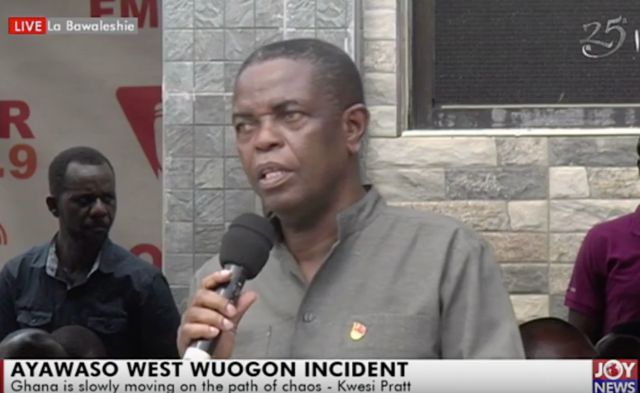 “People make arguments, you look them in the face, and you begin to wonder where common sense has fled to,” he said.

Speaking at an event to commemorate one year anniversary of the Ayawaso West Wuogon by-election violence by the National Democratic Congress (NDC) Mr Pratt Jnr said the EC’s claim that there were too many dead people on the register thus the need for a new register, was a bad argument.

He said a voters’ register was bound to have the names of dead people on it and that does not invalidate the register.

“Show me one country in the world, from Afghanistan through India, through Pakistan to the US, where you don’t have dead people on the register. It is impossible to have a register without dead people.”

Another bad argument, Mr. Pratt said, was the EC’s claims that the new register was necessary because the old machines had become obsolete.

The Commission intends to complete the exercise by May 30, 2020.

The Commission also expects to exhibit the new register from August 15 to August 28, 2020.

Confirming these, Deputy Chairperson of the EC in charge of Operations, Mr Samuel Tettey said the EC will deploy 8,000 registration devices to cover the 32,000 polling stations across the country.

According to him, if the machines had become obsolete, it still did not warrant the EC wiping the entire voters’ data and calling for a new registration process.

“If the machines are faulty, why wipe the whole data? Why don’t you simply change the machines?”

The veteran journalist also stated that the EC arguing that due to the work some people do their fingerprints have been lost thus the introduction of facial recognition is unwarranted.

According to him, just as fingerprints had been deformed, faces could also be deformed.

“This whole argument is so nonsensical, it doesn’t make sense and unfortunately for us, we have an electoral commission and commissioners who have been wearing their biases as badges of honour,” he said.

DISCLAIMER: The Views, Comments, Opinions, Contributions and Statements made by Readers and Contributors on this platform do not necessarily represent the views or policy of Multimedia Group Limited.
Tags:
Kwesi Pratt Jnr