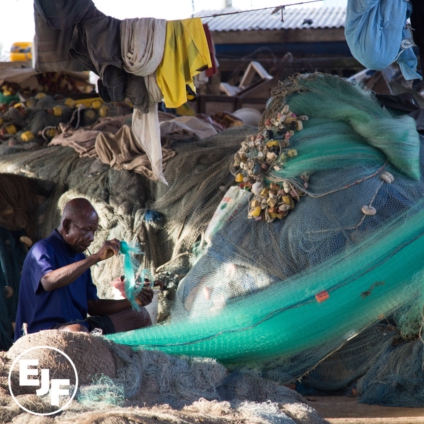 An initiative has been launched in Ghana to protect the coastline from the damaging effects of abandoned, plastic fishing nets.

The scheme, which also provides incomes to hard-pressed coastal communities, is depicted in a new film from the Environmental Justice Foundation (EJF).

Ghana’s marine fisheries employ over 135,000 fishers directly and about 2.6 million people along the value chain rely on it for their livelihood.

Yet the sector is in sharp decline with incomes of small-scale fishers declining by 40% between 2001 and 2011.

Nearly 200 fishing communities, which are severely impacted by illegal fishing and overfishing, are having their livelihoods threatened by destroyed, abandoned or lost fishing gear – the deadliest form of plastic pollution, which forms floating death traps entangling and choking marine wildlife.

It is already gathering pace. 600 fishers have been trained to participate and 4.6 tons of nets have been collected. These are being transformed into durable, sustainable products, such as spectacles.

The film raises awareness about the harmful effects of lost or discarded fishing gear, and other forms of plastic pollution and offers solutions.

It shows how local fishers collect discarded monofilament nets and prevent them from ending up in the sea for submission under the project while benefiting financially, EJF reported.

The Net Free Seas project continues to educate fishers and the general public on the effects of destroyed or abandoned fishing gear on Ghana’s fisheries, as well as how to achieve behavioural change to end the inappropriate disposal of destroyed or waste nets.

This will reduce the extent to which they enter vulnerable and important marine ecosystems, safeguarding the ocean ecosystems which support so many Ghanaians.

“A new, sustainable approach to the disposal of discarded nets and plastic waste is critical for a healthy, clean ocean. Increased public awareness of the negative impacts of discarded nets on marine ecosystems and animals is crucial to the fight against plastic pollution.

“This new film shows how fishing communities can work together to protect ocean ecosystems and make sustainable profits at the same time, through Net Free Seas.”

The film also reveals that four sea turtles caught in fishing nets were safely released. EJF says it will continue to work to protect ocean wildlife and empower local communities.

DISCLAIMER: The Views, Comments, Opinions, Contributions and Statements made by Readers and Contributors on this platform do not necessarily represent the views or policy of Multimedia Group Limited.
Tags:
Environmental Justice Foundation (EJF)