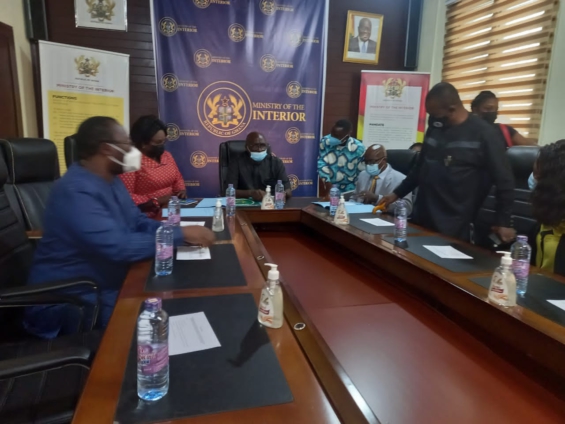 The Ministerial Committee set up by Interior Minister, Ambrose Dery, to investigate the Ejura protest that turned turbulent, leading to the death of two persons on June 29, has submitted its findings.

The presentation was done at the conference room of the Interior Ministry.

According to George Kingsley Koomson, the Committee during its hearings, treated the matter with all seriousness to ensure it provides substantial recommendations to the government.

“I want to let you know that we attached serious importance to the work and dedicated ourselves to all issues with meticulous attention and details. Having assured ourselves after listening to 22 witnesses and reviewed volumes of documents, including audio and videos, we have come with our findings and proffered some recommendations. And we hope the government, through your good self [Interior Minister], will give a good ear to them and implement them,” he said.

Others include; Central Commander of the Ghana Armed Forces, Brigadier General Joseph Aphour and the MCE of Ejura Sekyedumase, Mohammed Salisu Bamba and the Medical Superintendent of Ejura Government Hospital, Dr Mensah Manye.

On July 6, the three-member committee set up by the Interior Ministry after a directive from President Akufo-Addo commenced its investigations. It completed its work on July 9, 2021.

Meanwhile, according to JoyNews’ correspondent, Maxwell Agbagba, Interior Minister Ambrose Derry says persons found culpable in the Ejura disturbances and subsequent killing of two people, will be made to face the full rigours of the law.

On the use of Military personnel for minor law enforcement duties, he says collaborations between Soldiers and police have resulted in the peace and tranquility Ghana is currently enjoying.

On Monday, June 28, it was reported that a social activist, Ibrahim Mohammed who was attacked by assailants at Ejura Saturday dawn, had died.

The deceased, was attacked by two assailants, who have allegedly been arrested by the Police. He was repeatedly struck on the head with objects until he lost consciousness.

“The Interior Minister is to provide a detailed report from the inquiry, with recommendations for appropriate action to be taken by July 9, 2021”.

DISCLAIMER: The Views, Comments, Opinions, Contributions and Statements made by Readers and Contributors on this platform do not necessarily represent the views or policy of Multimedia Group Limited.
Tags:
Ejura
Interior Minister
Ministerial Committee