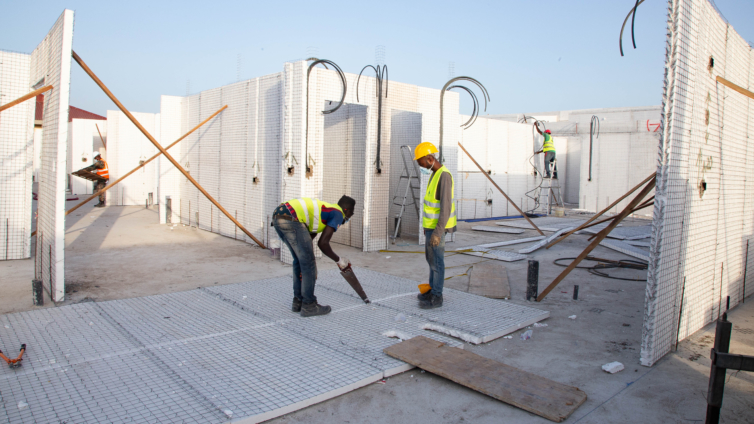 If ever there was an ambitious project in this country, it must be the 100-bed Infectious Disease Centre being built at the Ga East Municipal Hospital.

It represents for me, a concrete example of not letting a crisis go to waste. The COVID-19 pandemic arrived unannounced and like the rest of the world, our unpreparedness was exposed.

The first things that became obvious we didn’t have, were the Personal Protective Equipment, (PPE) and it turned out the whole world was looking for the same things. So, we joined in the global queue to find them.

When it came to the deficit in hospital beds and Intensive Care Unit facilities, we were stuck. We looked on in impotent awe as the Chinese built two coronavirus hospitals in 10 days. Over here, six-unit classroom blocks regularly take years to build.

It was right at the beginning of the outbreak of the pandemic in our country when many people were bracing themselves for the worst possible scenario that Senyo Hosi and two of his friends, Tony Oteng-Gyasi and Edward Effah came up with the idea they would organise the private sector to do something concrete to help the efforts of the government.

Things happened quickly, the idea was to find 1,000 private sector business people to donate GH¢100,000 each to help the government to provide the emergency needs thrown up by the coronavirus. They formed the Private Sector Fund for the purpose.

One thing led to another and they decided rather than be buying consumables for hospitals and health workers, they would do something quite dramatic and build a much-needed Infectious Disease Centre.

Two other friends, Kwaku Bediako and Dr Justice Yankson were drafted for the project concept development.

A 100-bed isolation centre was going to be built to be attached to the Ga East Municipal Hospital, which had been drafted for use as the treatment centre for COVID-19 patients.

Such a facility would be the first one ever in Ghana. President Nana Addo Dankwa Akufo-Addo gave his wholehearted support and performed the sod-cutting in a virtual ceremony and these very brave men announced that the project would take six weeks to complete.

Nobody believed that of course, but this, coming in the midst of the lockdown, it was a time when people were willing for the impossible to happen. If the Chinese could put up hospitals in 10 days, maybe we could build a 100-bed Infectious Disease Centre in six weeks.

The Minister of Health Kwaku Agyeman Manu threw in his enthusiastic support and his officials were told to give every help.

I probably at this stage, should declare my interest about the members of the team that constitute this Private Sector Covid Fund: Senyo Hosi, the Chief Executive of the Ghana Chamber of Bulk Oil Distributors has Abutia roots. Need I say more?

Tony Oteng-Gyasi, Chief Executive of Tropical Cables is one of my most favourite people on earth. Edward Effah, Chairman of Fidelity Group is married to Dzifa, who owes me lots of visits and will now blame it on COVID-19.

Kwaku Bediako, who owns a building he named The Elizabeth, which is enough reason for me to rate him highly, and Dr Justice Yankson, who must be okay to be in this prized group.
I am willing them on, I am watching the daily video updates on progress of the project being sent to me by Senyo and I am praying that it is completed before we run out of ICU beds.

I went to the site last Saturday to see things for myself. First lesson when I got there, virtual is not the same as the real thing. The original six-week target had already been changed to 12 weeks, but this was because the original plan had been expanded and we now have a truly world-class facility that they are hoping to finish and hand over within a few days.

I knew that the project was being executed in collaboration with the Ghana Armed Forces (GAF), but I was not prepared for the many surprises that would bring me.

The two architects on site are military officers: Flight-Lieutenant Ivy Naa Ayorkor Tetteh and Capt Frederick Selorm Khako explain to me calmly that the same way there are doctors, engineers, musicians and other professionals in the military, there are architects as well. You learn something new every day.

Flt-Lt Ivy Tetteh had taken over the project from another female architect, Ruthanne Richardson who is now busy planning the next project. Meanwhile, at the site, Flt-Lt Tetteh has a very soothing demeanour, but you soon discover that when she is in charge, things get done and on time.

The civilians learn that when we have been set a target, we have to meet it, or nobody leaves. One day, buses were stopped and the day shift made to come back and finish what had been set. Your shift is over when you have accomplished your task and not because it is 6 p.m or 6 a.m. Work goes on at the site around the clock, 24 hours a day, seven days a week.

Flt-Lt Tetteh confesses she did not believe at the beginning that the project would be seen through to the end. What is the secret then? Commitment, she said and it was a word I was to hear from everybody, plus, the Flight-Lieutenant said: “Senyo, he doesn’t take no for an answer, and his enthusiasm is catching; you soon realise this is something different, something special and everyone involved in the project is proud to be part of it.”

I am told about someone who was involved in the roofing who made a mistake. He was made to take down what he had done and re-do it properly, and ended up spending the whole night and left in the morning. He swore he would never have anything to do with the military in his life even if that meant going without a job.

It turns out this individual is now a permanent feature of the site, he comes even if there is no work for him, he offers his services for free, he wants to be part of the project and he is proud of it.

The quality of the work gladdens your heart. There is nobody who thinks they should put up with crooked lines or shoddy work of any kind. The materials are of the highest quality and the workmanship shows excellent expertise.

Apart from the Military, the Built Environment Professionals, comprising the Ghana Institutions of Architecture, Engineering and Surveyors are part of the group and the Ghana Medical Association (GMA) is there to make sure what is built is fit for purpose.

And I am hearing that the project is returning great value for money. I ask Surveyor Ian Agbenyega, the Quantity Surveyor on the site when I was there, ‘why is this project able to be delivered speedily and at a good price?” Commitment, he says, everyone who has been involved wanted to deliver a good product.

I speak to Surveyor Kofi Obeng Ayirebi, Chairman, Quantity Surveyor Division of the Institute of Surveyors and I want to know if the speed and cost of the project could be replicated? It took him a while, but he said the secret was the transparency in the procurement process.

As for the speed, probably the military had something to do with it, but the secret was everyone wanted to do something for Ghana. People felt proud to be part of something that was solving a problem for Ghana.

It turns out my friends did not find the 1,000 private sector Ghanaians that they hoped would each donate 100,000 Ghana cedis, and they have not found enough people to donate 10,000 cedis or even the 10 cedis challenge that Senyo came up with to try and raise money to fill the funding gap.

Indeed, the bulk of the money for this private sector project has come from the public sector.

The big donors have been the Bank of Ghana, the GNPC, the COVID-19 Fund, and between them, they carry about 75 per cent of the $5.5 million cost of this Private Sector Fund project.

Since there are plans to build a few more of the facilities around the country, my friends will have to be even more imaginative than they have been in delivering this 100-bed Infectious Disease Centre.

We might not have done it in ten days or six weeks, but a miracle of sorts has happened at the Ga East Municipal Hospital.

DISCLAIMER: The Views, Comments, Opinions, Contributions and Statements made by Readers and Contributors on this platform do not necessarily represent the views or policy of Multimedia Group Limited.
Tags:
Elizabeth Ohene
Infectious Disease Centre