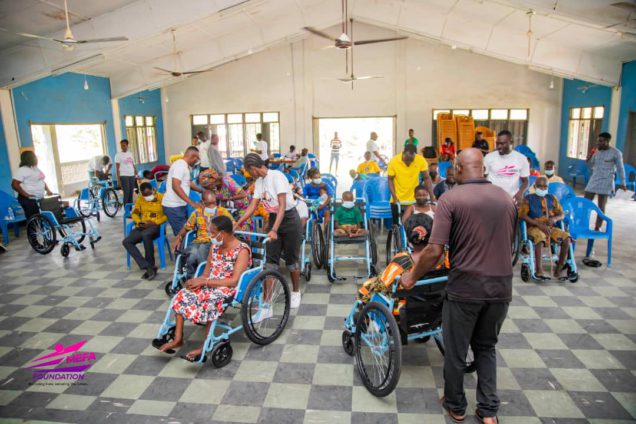 The Emefa Foundation has reached out to persons with disabilities by donating wheelchairs to them.

The Accra-based NGO presented twenty wheelchairs to some persons with disabilities at a brief ceremony at the Adidome Old Assembly Hall in the Central Tongu District of the Volta Region on Friday, 12th November 2021.

Present at the short gathering was the Administrator of Health Directorate for the district, Selasi Agbesi, the Social Welfare Director, Lucky Adokple, as well as the chairperson for persons with disabilities in the Central Tongu District.

According to the lead and founder of Emefa Foundation, Yvette Emefa Gbeve, the organization is committed to helping persons living with disabilities go about their everyday routine with less difficulty and also reminding them that their disability is not an inability.

“We just want to encourage the people with disability that their disability does not mean inability and, therefore, should not stop them from going about their day-to-day activities,” she explained.

One of the beneficiaries of the wheelchair project, Gifty Avudoahor, expressed immense gratitude to the foundation for coming to aid.

She also bemoaned how some of them have been neglected by their families and made the passionate appeal that persons with disabilities should be supported and not neglected.

The Foundation, as part of their initiatives also visited the Adidome Government Hospital where they donated fifty packs of bottled water to the health facility.

Ms. Gbeve revealed that one of the challenges of patients at the facility was the difficulty to access potable water, hence, the foundation’s gesture to them.

“Those on admission sometimes find it difficult to get good drinking water to take their medication with… and we know water is life, so as part of our initiative, we decided to give out fifty packs of bottled water to all persons on admission at the hospital.”

Below are more pictures from the donation.