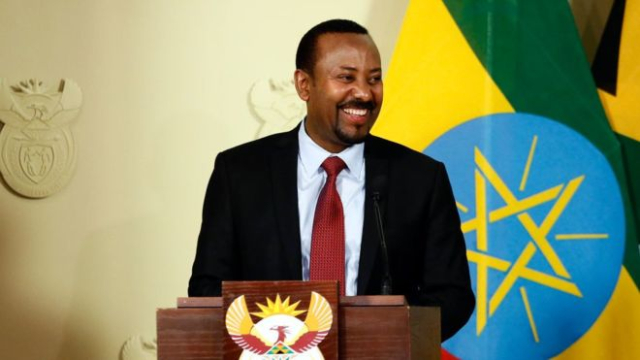 US President Donald Trump should take his complaint about being overlooked for the Nobel Peace Prize to the award organisers, Ethiopia’s Prime Minister Abiy Ahmed, the 2019 winner, has said.

Mr Abiy said he was not aware of the criteria used to select him.

He was credited for his move to make peace with neighbouring Eritrea.

Mr Trump said last week that he had “saved a country” from a big war, a possible reference to his work on another dispute involving Ethiopia.

Ethiopia and Eritrea fought a bitter border war from 1998-2000, which killed tens of thousands of people.

Although a ceasefire was signed in 2000, the neighbours technically remained at war until July 2018, when Mr Abiy and Eritrea’s President Isaias Afwerki signed a peace deal.

The Norwegian Nobel Committee said Mr Abiy was honoured for his “decisive initiative to resolve the border conflict with neighbouring Eritrea”.

What did Mr Abiy say?

He told reporters during a press briefing in South Africa that he was “not working for the prize” but for “peace in the region”.

“I don’t have any clue about the criteria, how the Nobel committee selects an individual for the prize,” he said.

“If President Trump complained it must go to Oslo not to Ethiopia,” he added.

What had Trump said?

He told supporters at a political rally last week that he had helped avert a war in “a country” and expressed surprise that his efforts were not recognised.

“I made a deal, I saved a country, and I just heard that the head of that country is now getting the Nobel Peace Prize for saving the country. I said: ‘What, did I have something to do with it?’ Yeah, but you know, that’s the way it is,” he said.

A Twitter account run by the Democrats in Congress teased Mr Trump saying he seemed to not know why Mr Abiy won the peace prize.

The tweet said the president had confused his meeting last year in November with representatives from Egypt, Ethiopia and Sudan, over a dispute about the use of the Nile waters, as worth of a Nobel prize.

Trump is confused.
PM @AbiyAhmedAli was awarded the @NobelPrize for his efforts to bring peace to the Horn of Africa, not stalled negotiations about a new dam on the Nile.

If they gave the Nobel for deals that didn”™t happen, the Pres. would have a shelf full of them. #Ethiopia https://t.co/WhJ6nLvb6Z

Egypt believes if Ethiopia fills the Grand Renaissance Dam, set to be Africa’s biggest hydroelectric power plant, in six years instead of 21 years, it would threaten its water security.

A US initiative to find a solution over the River Nile standoff has so far failed. Mr Abiy has asked South African President Cyril Rampahosa to mediate the talks.

However, representatives of the three countries are due to meet again this week in the US.