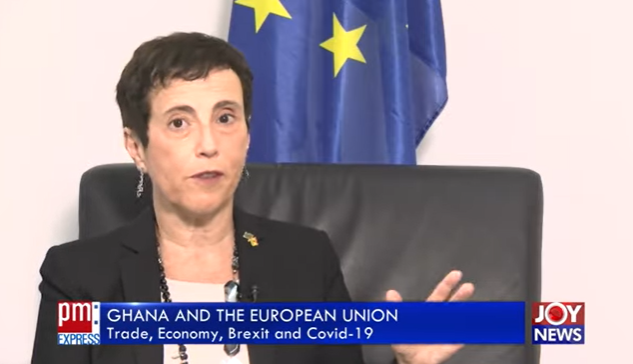 The European Union (EU) will soon remove Ghana from the list of money laundering and terrorist financing countries.

The Head of the EU delegation to Ghana, Diana Acconcia, disclosed this on PM Express Business Edition on 25th March 2021.

According to Mrs Acconcia, the Union is taking this action because Ghana has made a lot of progress in taking corrective measures to deal with the issues raised by the Financial Action Task Force (FATF).

She told host, George Wiafe that the Union is now waiting for the FATF report or review to take further action on the issue.

“It’s just a matter of time as that the Financial Action Task Force officials should be in town soon for its final review, physically or a possible virtual review.”

“They are ready to remove Ghana from the list and I hope they can come and do that very soon, because they country has made a lot of progress,” she explained.

The European Union on May 7, 2020 announced that it put 12 countries on the list of places with weak or deficiencies in Anti Money Laundering and Terrorism financing laws.

In Ghana situation, the action or directive was supposed to kick in from October 2020.

According to the EU, these weakness identified in these countries possess a serious risk to their financial system hence the action, based on recommendations from the Financial Action Task Force, the Union went ahead to put Ghana on the list.

Ghana’s Finance Ministry, later in the statement, described the action as surprising and unfortunate, especially when government  claimed that they had already steps to address all the issue, identified by the financial action task force. The action came with some scrutiny for Banks in the Ghana dealing with their counterparts in Europe.

Governor of the Bank of Ghana, Dr. Ernest Addison recently noted that the action impacted negatively on some banks.

The European Union’s action was based on Financial Action Task force  report on countries it deemed to have weak Anti Money Laundering and counter-terrorism financing laws that needs to be corrected.

Therefore, EU’s decision will largely be based on whatever the task force is statistical with measures that Ghana has taken to address issued identified in the earlier “sanction” statement

According to the Head of EU delegation to Ghana, Diana Acconcia she is confidence about Ghana sailing through.

Meanwhile, Finance Minister-Designate Ken Ofori Atta has noted that based on his conversation with officials of the Financial Action Task Force FATF, they seem satisfied with measures taken by government and will soon be removing Ghana from the list.

Mr. Ofori-Atta, however, disclosed that this will be after they coming to town for that final review which should happen in the coming days.  This should pave the way  for the European Union to also take action on Ghana.

The Minister-Designate disclosed this when he appeared before parliament’s Appointments Committee on March 25, 2021.

The Financial Action Task Force (FATF) is an inter-governmental policymaking body whose purpose is to establish international standards, and to develop and promote policies, both at national and international levels, to combat money laundering and the financing of terrorism.

The EU and financial support for Ghana

Head of the EU delegation to Ghana also disclosed that that Ghana will still continue to receive financial support from despite its new status as a low middle income country.

Some of Ghana’s development partners have had to cut support for Ghana and review budget support because of its status after moving from Developing country to Low Middle Income Country.

But Mrs. Acconcia maintained that they have not reviewed their stance on Ghana in terms of financial support, adding that “we are currently at the stage of that could see a new “form” of financial support program for the Ghana over the next four year.

“There has not been any  funding cut and I don’t see that happening anytime soon,” she added.

The Head of delegation also told George Wiafe they are also supporting some ongoing projects the EU is currently supporting, all aimed at quick recovery of the economy.

The Head of Delegation noted that during the Covid-19 period, they disbursed more than the €80 million to government. This was meant to assist government for it determine its own areas that it want to direct funding.

Ghana was one of the few countries that has been praised by its development partners and the World Health Organization over how it has managed the pandemic. According to the Head of the EU delegation they are also excited about how government manage the situation.

On how the pandemic affected them, she noted the mission was not speared at the initial stage as they alo resorted to working from home.

With the deployment of vaccines, she is optimistic that the situation will be brought under control very soon. The ambassador also disclosed that they are working through other initiatives to support private businesses.