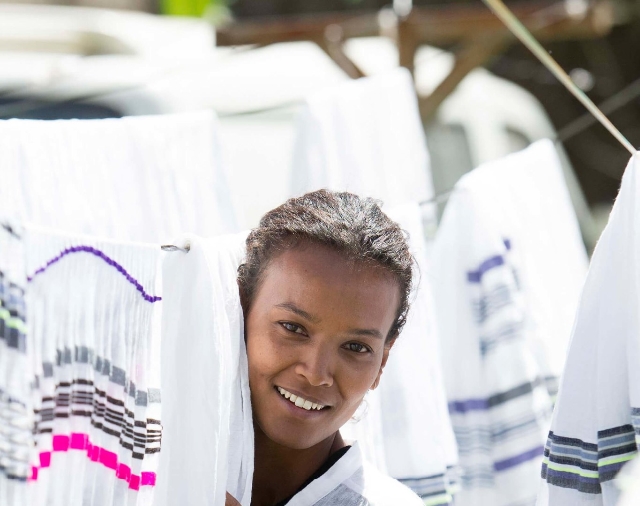 In 2016, Suno shuttered after a decade of creating critically acclaimed collections in Africa. The next year, Maiyet, whose Nairobi artisans were once featured in a glossy New York spread, stopped making its own products and became an ethical-wear boutique in London. Edun, which Bono and his wife Ali Hewson founded in 2004, held on until last year when LVMH divested, and operations ceased in the US. It had suffered about $80 million in accumulated losses.

Designers like Vivienne Westwood and Kate Spade continue to use African factories, but the wave of international luxury brands that tried to marry social consciousness, quality African artisanship, glitz in the Western press, and high price tags has mostly faded. And yet, the African luxury goods market was valued at $5.9 billion in 2016, and LVMH predicts that it will grow 30 per cent in the next five years.

New talent is emerging on the international stage. South Africa’s Thebe Magugu and Nigerian designer Kenneth Ize are in the running for the 2019 LVMH Prize for young designers. McKinsey says buyers for international luxury stores are increasingly taking sustainability and ethical concerns into account. “I think the landscape has evolved in such a wonderful way to appreciate and absorb this idea of artisanship from unusual places,” says Maiyet co-founder Kristy Caylor.

In this environment, there are opportunities for upscale, black-owned, socially conscious brands that largely produce in Africa.

Learning from past mistakes

Studio 189, a fashion label co-founded by Rosario Dawson and Ghanian-American designer Abrima Erwiah in 2013, has learnt from the missteps of Edun. “Somebody has to go first. If they didn’t try, then we wouldn’t know,” says Erwiah, who collaborated with Edun on a Resort 2018 collection.

Studio 189 deliberately started slow — with one tailor and a community of sewers in Cape Coast — instead of leveraging Dawson’s star power to generate buzz and get the product into large stores. They had seen the backlash against Edun — which celebrity friends of Bono had worn to promote its launch — when retailers like Saks complained about late shipments and shoddy quality, and ultimately dropped the label en masse. (Julien Labat, Edun’s chief executive, declined to comment.)

“If people are complaining about the quality, the first thing we need to do is to make sure [the artisans] are extremely skilled at something before you take it to the next product,” says Omoyemi Akerele, founder and chief executive of Lagos Fashion Week.

African manufacturer Liberty & Justice held a glitzy launch for in-house brand Uniform at Soho House in 2015 — but that was five years after it built Africa’s first fair trade certified factory in Liberia and trained workers to meet international production standards. Today, it focuses mostly on knitwear, which Liberty says the continent’s factories excel at.

Similarly, Studio 189’s partners decided to invest their own money and work with the United Nations to open a small factory in Ghana. The team brought in mostly foreign experts and skilled local tailors to train employees. The plant’s quality is now good enough that it now also produces for other African and international brands. In 2018, the label won the CFDA’s Sustainable Fashion Initiative Award.

“The approach we took was intentionally quiet. I didn’t want it to be a celebrity brand,” Erwiah says.

Provenance is only part of the equation

While the likes of Studio 189 and resort wear line Lemlem employ many African craftspeople, their supply chains are global and reflect the reach of the African diaspora. Lemlem was founded by Ethiopian model Liya Kebede, who is now based in the US, while Canadian-born Aurora James created luxury footwear brand Brother Vellies, which the CFDA has also lauded.

After growing 300 per cent in 2017, James decided to revamp Brother Vellies’s production model. The label had sampled sandals in South Africa but received negative feedback from artisans, who couldn’t relate to the product. While the brand makes it signature kudu leather vellies, a South African walking shoe, in the country, James has extended production to Mexico and even Italy.

“I was so committed to everything being 100 per cent made in Africa,” says James. “That was a mistake.” Now she goes wherever there’s a tradition, so Italy makes heels and Mexico manufactures cowboy boots. “I’m sure we could train them to make a cowboy boot in South Africa,” she says. “But when Mexico has much more of a historied relationship with that shape and is still making it, why wouldn’t we make it there?”

James has found that the Brother Vellies customer doesn’t mind — just witness the uniformly gushing comments on Brother Vellies’s Instagram posts on Mexican huaraches and Italian-made PVC heels and purses. “Girls buy our sandals because they think they’re cute. Ultimately the focus has to be on the product,” she says.

Although labour is cheaper in Africa than almost anywhere else, some of Brother Vellies’s locally crafted products are actually more expensive to make than Italian-manufactured shoes. “A lot of that comes down to the fact that you’re training people to make things properly,” says James. “It takes hours and hours.

Western retailers are increasingly open to stocking luxury goods with an African provenance. Lemlem sells to Net-a-Porter and Le Bon Marché, while MatchesFashion.com and Shopbop are stockists for Brother Vellies. However, the traditional wholesale model can be unkind to African infrastructure that hasn’t traditionally been geared toward exports.

While Liberty & Justice has built good relationships with Liberia’s government, it still has to deal with problems at the port, where shipments can get held up for prolonged periods. “We’ve done big projects with Bloomingdale’s where we didn’t deliver on time, which didn’t make them too excited,” says Liberty.

“Power and connectivity are major structural challenges that can affect doing business at the speed we’re used to here in the US,” says Kebede of Lemlem, which shipped 35,000 pieces around the world last year, and recently began distributing from a European warehouse.

Another challenge is that retail buyers and consumers are accustomed to standardised manufacturing coming out of China and might not know how to merchandise African artisan fashion. There’s no space on the shelf for an entire brand story. “I struggle with buyers,” says Erwiah. “They have to adapt to a new type of client, with different interests and different needs. I don’t think they know where to put it in their store and how to position it.”

“You can pivot a lot easier in a direct-to-consumer model if something isn’t working out,” says James of Brother Vellies. “Versus wholesale, where they’re like, ‘This cow print is a little bit different from the sample.’ Well, because it’s a real cow, not a print. The customers know that it’s a Nguni cow, from the Nguni people.”