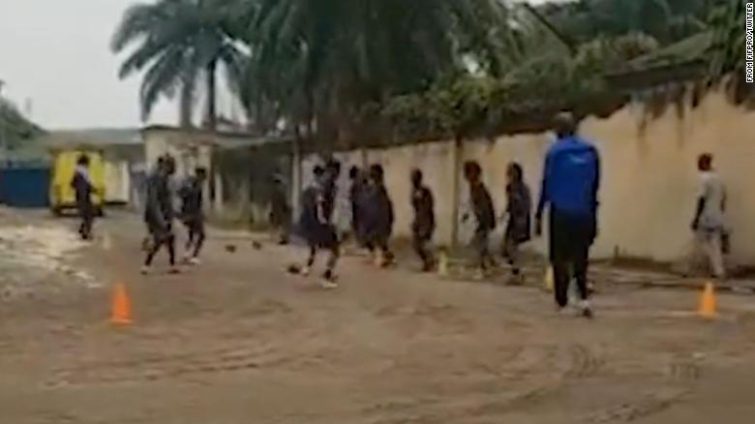 FIFPRO says the video, which it posted to its official Twitter page on Thursday, shows the team executing a passing drill on a dirt road with cars and motorbikes passing by. At one point, the drill is interrupted as a yellow van drives down the road between the players.

“Player welfare is a top priority for FIFA and we have taken immediate steps with authorities in the country, including FECOFA [the Congolese Federation of Football Association], to guarantee the safety and welfare of all players involved,” said FIFA in a statement sent to CNN.

Players’ union FIFPRO says FECOFA did not book adequate pitch time ahead of the team’s 2022 World Cup qualifier against Cameroon on September 25, which the team lost 4-0 at home.

The video that FIFPRO posted then shows the women sleeping outside in their tracksuits. FIFPRO says they were kicked out of their hotel on October 12, which the players’ union said the Congolese FA didn’t pay for.

“This is unacceptable,” FIFPRO wrote at the end of the video, which it said in a statement was taken by a member of the public.

The treatment of women footballers in Africa, notably around finances, has long been an issue on the continent.

The Congolese FA (FECOFA) did not respond to multiple requests for comment by CNN over the past few days. CNN could not verify the contents of the video.

“The Congolese player union is in contact with the players. They are ok and now back at their homes, if upset about their appalling treatment by the national federation,” FIFPRO said in a statement to CNN.

“The union has also written a formal letter of complaint about their treatment to the Congolese FA,” the statement said.

The women’s Under-20 World Cup is due to take place in Costa Rica next year after being postponed since 2020.

DR Congo lost its return fixture against Cameroon 5-0, meaning the latter will now face Nigeria in the next round.