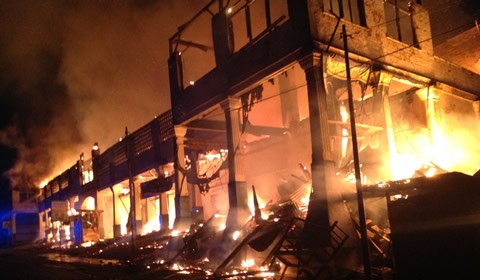 The Fire Service is calling for a review of architectural designs of buildings to reduce fatalities in the event of a fire outbreak.

The National Chief Fire Officer Dr. Albert Brown Gaisie speaks of a trend where many victims of fire outbreaks are trapped by burglar proofs and die as a result.

He says a lot of buildings by their designs fuel the spread of fire, adding that the architectural designs have become killer traps in the event of fire.

Mr. Gaisie was speaking at the inauguration a new ¢233,689 fire station constructed by the KMA at Bremang Abusua Kuruwa in Kumasi.

On June 2013, three people were burnt to death in a fire, which gutted a six-bedroom house at Agric Nzema in Kumasi.

Their charred bodies were found beneath a metallic burglar proofing, indicating a possible entrapment due to the security barricade within the building.

"In situations where people are barricading themselves with metals. They are building houses and in front of their houses they have metals surrounding them. They are worried about security than safety forgetting than you can be secure but not safe and you can be safe without being secure," Mr. Gaisie said.

He said people barricade themselves and can’t find their padlocks in cases of emergency and the smoke alone muzzles them and they cannot come out.

Mr. Gaisie said, "In past situations, a lot of people get trapped and the GNFS needs specialized tools to cut these metals to enter."

He said other people build without looking at the wind direction, which is the reason why he is advising people to consider all these in the architectural configuration of their building.

He commended the Assembly for their contribution.