Queues have formed outside banks in Zimbabwe as people hope to get hold of the country’s first Zimbabwe dollar notes to be issued since 2009.

The currency was scrapped a decade ago because of hyperinflation when prices were almost doubling every day.

The bank has played down fears that the move will fuel further inflation.

Currently inflation is thought to be about 300%.

This figure is an estimate according to the latest data published by the International Monetary Foundation. The Zimbabwean government has stopped publishing an official figure itself.

The Reserve Bank of Zimbabwe insists that the two- and five-Zimbabwe dollar notes will not increase overall money supply. The cash is supposed to replace money that was stored electronically.

Why didn’t Zimbabwe have its own currency?

Since the country scrapped its own currency in 2009, Zimbabweans had relied at various times on US dollars, South African rands, as well as other foreign currencies, an electronic currency called the RTGS dollar, and what are called bond notes. 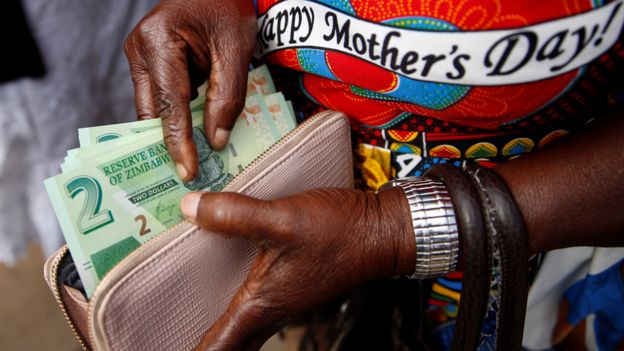 The banks limited the number of dollars each customer could withdraw

In 2016, the government introduced the bond notes and coins, which were supposed to be equivalent to the US dollar, to make up for the dollar cash shortage.

But no-one had faith that they were equivalent in value and, on the black market, bond notes lost value against the US dollar.

Then in February this year, the government introduced the Real Time Gross Settlement (RTGS) dollar, which was described as a new currency, but only existed electronically.

US dollars and other foreign currencies were banned in June by the central bank, citing the need to return to normality.

The government says the new notes will ease the cash shortage that has seen most people unable to withdraw their pay and savings.

But the BBC’s Shingai Nyoka in Harare says the government has a chequered past with money management and many people remain convinced that a huge cash injection in the middle of an economic crisis will stoke inflation.

Since the reintroduction of the RTGS dollar local currency in February, inflation has soared. A loaf of bread now costs seven times as much as in January.