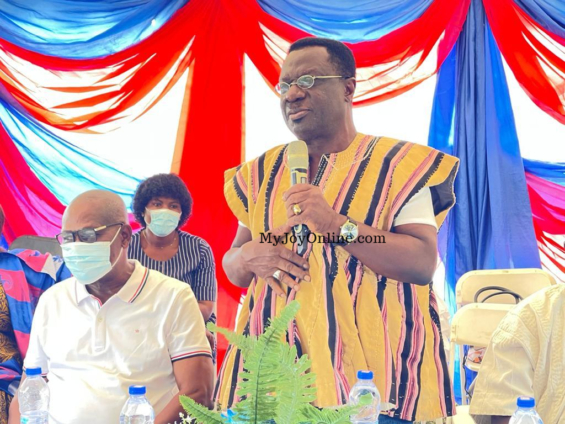 A National Chairman hopeful of the New Patriotic Party (NPP) Prof. Christopher Ameyaw-Akumfi has urged both executives and grassroots members of the Party in Atebubu-Amantin Constituency, to bury their differences and embrace unity towards a common cause of recapturing the lost Parliamentary seat in the area.

The former Member of Parliament for the Techiman North Constituency stressed that there is the need for the Party to focus on the welfare of the polling station executives as well as maintain discipline in order to win back the seat as well as “break the 8”.

Prof. Ameyaw-Akumfi made this call whilst addressing some Regional, Constituency and Polling Station Executives and the teaming Grassroot Supporters at the party’s delegates conference in the Atebubu-Amantin Constituency.

The Conference, as per Article 7 (27) of the Party’s constitution was held in two Zones at Akokoa in Amantin and Konkronpe in Atebubu respectively, under strict Covid-19 protocols.

“Majority of the people here are polling station executives and if we are going to win the next elections, majority of the work depends on you because you are the only people who have face to face encounter with the electorates.

“We need to start campaigning from today with support from the executives,” he said.

He further indicated that “if we want to recapture the Atebubu seat in 2024, we have to start campaigning today and not wait until the last minute to start the campaign because we really need to win this seat and win the region as well”.

He charged the party to introduce programmes that would help resource the polling stations in order to help them in the discharge of their mandates.

He also used the opportunity to call on the delegates to support his quest to lead the party as the National Chairman ahead of the next elections.

The Constituency Executives together with the former Parliamentary candidate thanked the party stalwart for his immense contributions and support during the election and pledged their unflinching support for his bid to become the National Chairman of the great elephant party, NPP.