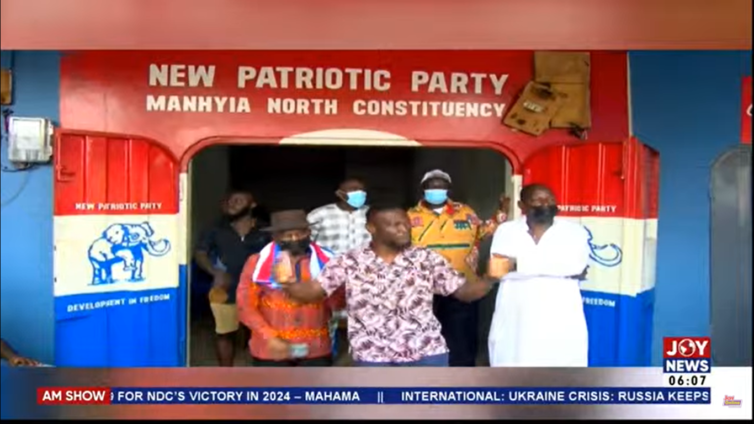 The Sunday incident started when supporters protested a decision by the constituency executives to sell the forms to them when they had already been paid for by Benard Antwi Bosiako, the Ashanti Regional Chairman of the party.

“The Regional Chairman has paid for 1000 of the forms, and we have over 2000 forms, so mathematically, the new entrants are required to pay for theirs,” the constituency’s Election Committee Chairman, Yaw Geraldo, told Luv FM’s, Kofi Asare.

But refusing to accept this explanation, the supporters massed up in front of the party office and demanded that the forms be given to them.

“How can we ‘Break the 8’ if these things keep happening. So we are pleading with you Nana Addo [sic] turn your eye to Manhyia North or else,” an agitated prospective applicant stated.

Another added, “If the forms are not given to us, there wouldn’t be any election at Manhyia North. It is not a threat, but we know what to do.”

In the thick of the tensions, the police intervened, but that did not stop the angry party members from finding alternative routes into the office to pick up their forms.

“Just because of polling station executive, see how tattered I look. Just because of this paper called forms, look at the state I am in, O God!” one supporter cried.

Although the election of polling station executives comes off next month, in some parts of the country, party members have accused their executives of hoarding the forms.

This includes Kwadaso in the Ashanti region, where some NPP members locked up the constituency chairman on Saturday.

Similar agitations transpired the same day in Akuapem South Municipality of the Eastern region and Ningo-Prampram in the Greater Accra region.

The latest debacle is the Manhyia North constituency.

In view of that, Mr Yaw Geraldo noted that the process in the area will be postponed to ensure that peace and order are restored before the application is reopened.

He also added that the disturbance will be investigated.

Meanwhile, the NPP’s Director of Elections and Research, Evans Nimako, has directed the election committees not to deny anyone the opportunity to contest.

Speaking on JoyNews’ The Probe, he said, “I am expecting that whoever has been nominated by the region, whoever the constituency chairman is, the individual will go by our rules and regulations for the conduct of this election.”

DISCLAIMER: The Views, Comments, Opinions, Contributions and Statements made by Readers and Contributors on this platform do not necessarily represent the views or policy of Multimedia Group Limited.
Tags:
Chaos
Manhyia North
Nomination forms
NPP Polling Station Executives