Footbridges, white elephants and demonstrations – A cry for the beloved country 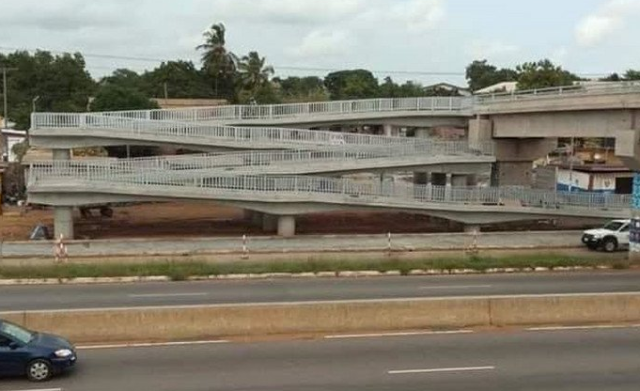 We have witnessed a series of class actions that have led to the construction of overhead footbridges in this country, all with the tax-payers’ money. In the capital city of Accra, a number of these footbridges constructed under pressure from citizens stand abandoned, a financial loss to the state.

It started way back in the 1980s when two overhead footbridges were constructed at the Kaneshie Market to help crossing from one side to the other. The first bridge which is quite closer to the market has completely been taken over by hawkers. And surprisingly, despite the concrete wall with wire mesh on top separating the two sides of the road, people have found a way of removing the wire mesh and jumping over with their loads rather than use the footbridges. The indiscipline really gets overwhelming.

Not too long after the Accra Mall was opened, there were recorded cases of people getting knocked down by speeding vehicles as they crossed over from the bus stops near African Regency Hotel to and from the Mall. The pressure was so much so that a footbridge had to be constructed for use by those who wanted to cross over to and from the Mall. If you happen to use that road today, perhaps it has not struck you yet but just take a look and count how many people are using the footbridge for the purpose for which it was built.

Then came the NI Highway, popularly known as George Bush Highway. I remember too vividly, the hue and cry for overhead footbridges on that highway when it was first opened a decade ago. The contractors were criticised for lack of proper stakeholder consultation before and during the construction of the Highway. The accidents on the six-lane dual carriageway were too many.

Daringly, people were crossing indiscriminately despite the speeding by drivers who were sometimes doing 100 kilometres per hour.  Eventually, the government was pushed to construct some overhead footbridges purportedly for those who had to cross from one side of the road to the other. Those footbridges stand abandoned today as people virtually run to cross the highway at will. Another financial loss?

And who will forget the planned demonstrations staged by some residents of Madina and Adenta, both suburbs of Accra? They had witnessed some fatal accidents on the dual carriageway between Madina and Adenta. The fatality which broke the camel’s back was when a student from West Africa Senior High School was knocked down and killed while crossing the road. The fierce demonstration laced with so many threats issued by the demonstrators got the sector Minister, the MP and other officials from Ghana Highways Authority to visit the scene to assess the situation. Shortly after, the construction of four to six footbridges got underway and completed in no time.

Today, one drives through the Adenta-Madina highway and people are still carelessly crossing the dual carriageway where vehicles are travelling at top speed. The overhead footbridges clamoured for have become white elephants. A local television station recently carried a news item on the abandoned footbridges and interviewed some of those seen running across the highway. Their excuses included darkness on the footbridge at night and also some miscreants who lurk around the bridge and snatch mobile phones and purses. The excuses were many and the very thing they wore red attires and agitated passionately for has been abandoned.

So, where do we go from here after all that financial loss caused to the state? We may not have the money to bring in sky trains or go for underground trains but we surely can stop this new crop of indiscipline which we have turned a blind eye to. Yes, the Adenta police last year started arresting people for crossing the highway instead of using the footbridges but what fear did it put into people? The scaling of walls at Kaneshie instead of using the bridge sometimes gets done under the eagle eyes of police officers.

Does anyone really care? So why should one not cry for Ghana our beloved country for all the naked abuse lawlessness and indifference?

DISCLAIMER: The Views, Comments, Opinions, Contributions and Statements made by Readers and Contributors on this platform do not necessarily represent the views or policy of Multimedia Group Limited.
Tags:
Footbridges