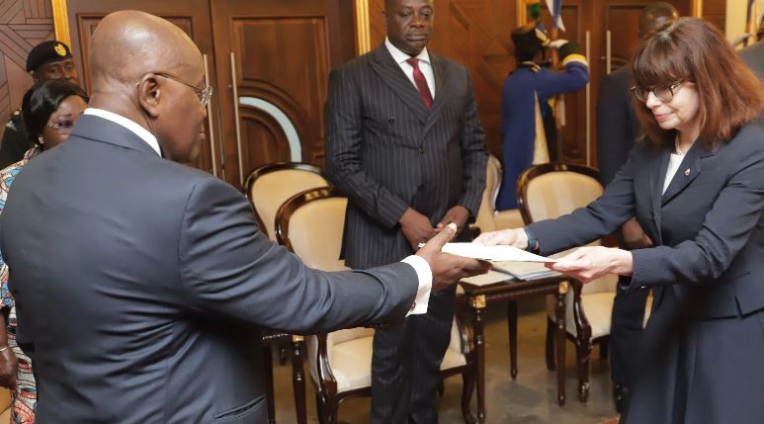 President Akufo-Addo on Tuesday received the Letters of Credence of four new envoys at the Jubilee House, Accra.

At separate ceremonies, President Akufo-Addo congratulated the envoys on their appointments, welcomed them warmly to Ghana and wished them a successful tour of duty.

He recounted the longstanding ties Ghana had had with each of those countries and reiterated Ghana’s commitment to enhancing the bonds of friendship and cooperation with them for mutually beneficial outcomes.

The President dwelled on the need for strategic partnerships and economic cooperation to advance bilateral relations with their respective countries and Ghana.

He also called for cooperation to end the insecurity in West Africa, and to fight climate change, and said his government would ensure that their respective official duties were carried out smoothly.

When she met the President, the Australian envoy, Mrs Owen-Jones spoke about her country’s engagement in the extractive industry in Ghana, which had been a pillar of bilateral relations for decades.

Australian mining companies, she said, had investments worth some $40 billion in the region, adding, “I am very proud of Australia’s engagements in the extractive sector in Ghana and the mutual benefits both countries are deriving from it.”

Mrs Owen-Jones also mentioned the educational collaboration between the two countries where Ghanaian professionals studied in Australia through an award scheme, as well as the commission’s work in communities in Ghana.

She said the commission had supported some 250 projects over the last two decades to deliver tangible development benefits in those communities.

“There is more we could do and of course work towards enhancing business links and closer links between universities of both countries as well as civil societies…The Australian government is ready to work with your government in building strong relationships.”

Mrs Owen-Jones told the President that both countries could do more to address pressing security challenges in the sub-region.

On his part, President Akufo-Addo recounted Ghana’s long-standing relationship with Australia dating back to independence era.

“We value so much our association with the commonwealth the commitment to democratic values, the respect for the rule of law and these are the things that bind our two countries closely.”

The President also lauded the key roles that Australian companies are playing in the extractive sector, saying, “We find the partnership useful.”

He was hopeful that the two countries would find more areas of cooperation to deepen relations.

Iran’s ambassador, Bijan Gerami Nazoksara lauded Ghana’s role in the comity of nations and commended the Government on its flagship programmes such as One District, One Factory, Ghana Beyond Aid, Planting for Food and Jobs amongst others.

He said he looked forward to deepening cooperation in the areas of health, education and technology during his tour of duty in Ghana.

President Akufo-Addo said Ghana and Iran had had strong relations for some time, with the two countries cooperating very well on many levels and pledged to deepen relations with the Western Asian nation.

“We appreciate very much your cooperation in the area of education as well as in our health sector; these are valuable initiatives for the Ghanaian people. we recognise Iran’s contribution to our development.”

The Swiss ambassador Simone Giger said the President’s recent state visits to Switzerland was a testimony of the excellent relations that exists between the two countries.

She noted that the President’s “excellent leadership” had further enhanced the relations between both countries.

The envoy pledged to strengthen the development cooperation with Ghana, particularly in the fields of education, science, digitization and climate change.

She referred to a landmark agreement signed in 2020 between the two countries on climate protection, saying, “I am keen and eager to work together with your administration on the realisation of this agreement.”

“We look forward to increasing the scope of activities in the area of security, education, where Switzerland has proved to be a valuable partner to Ghana.

In her discussion with the President, Madam Nyakeru, Congo’s Ambassador said she would reinforce bilateral cooperation between Ghana and her country.

DISCLAIMER: The Views, Comments, Opinions, Contributions and Statements made by Readers and Contributors on this platform do not necessarily represent the views or policy of Multimedia Group Limited.
Tags:
Envoys
President Akufo-Addo