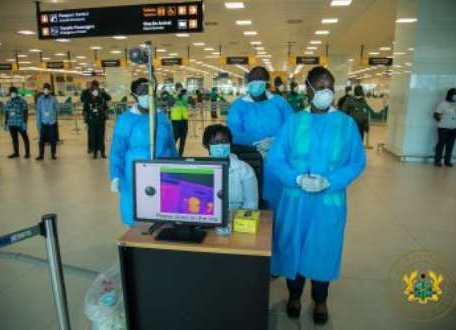 This, is according to the Transport Minister Kwaku Asiamah, who addressed Parliament earlier today.

He stated that over the period of 4 months, i.e. from September to December, the total revenue accrued from the Covid-19 testing was about $17.3 million.

“Per the contractual agreement, Ghana Airport Company was supposed to receive $10 of royalty per each test done, and Frontier Health Service was to keep the rest as their service charge. And the total cost for one test was 150 dollars.

“So the Frontier Health Service share was $140 while Ghana Airport Company’s share was 10 dollars. Mr Speaker, I want to inform this August House that from September to December 2020, the total amount realised from the Covid-19 testing at the Kotoka International Airport was $17,359,500.

“As per the concession agreement as stated earlier, Frontier Health Services retained $16,202,200 dollars from its services from September to December 2020.

“The Ghana Airport Company Limited received $1,167,300 for the same period as royalties accruing from the Covid-19 testing,” he stated.

He further reiterated that the only parties involved in the concession agreement were the Frontiers Healthcare Services and the Ghana Airport Limited.

“Mr Speaker it is worthy of mention that the only parties of the concession were the Frontier Health Services and the Ghana Airport Company Limited,” he said.