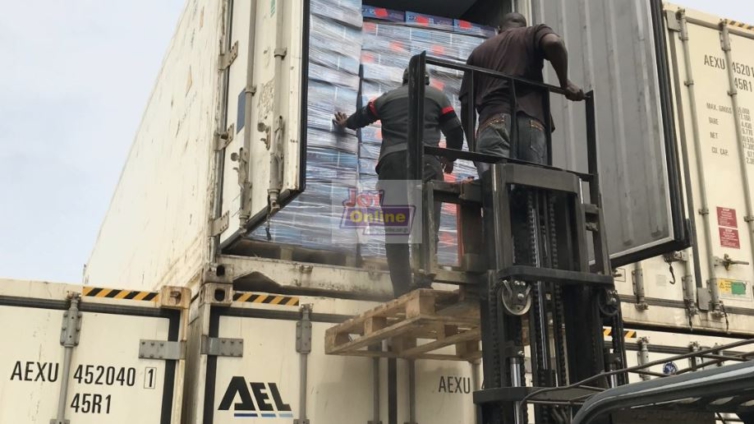 The Workers Union of the Ghana Revenue Authority (GRA) at a durbar on July 24, 2019, criticised the political class.

They alleged that family relations and close associates of people with political power and influence were using their influence to clear goods at the ports without paying the required tax.

They argued that that phenomenon was contributing to the revenue shortfalls of the country.

The accusations by the staff of GRA struck a chord with the investigator. So on August 1, 2019, in a sting operation after the launch of Operation “collect, name, and shame,” a team from the Customs Staff Association and two other labour unions stormed the premises of Labianca Company Limited to examine the consignment declared in the name of Ajax Company Limited and White Stone Frozen Food limited.

The objective was to verify the contents of 72, forty-footer containers at their premises following a tipoff that the companies involved had given false information to customs officials.

After an hour’s search, the team found out that the frozen food companies had concealed boxes of chicken instead of Sardinella fish they had stated on their declaration forms.

On 30th July 2019, one of the frozen food companies, Ayax Company Limited, gave misleading information about the content of some twenty forty-footer containers.

In the heat of the moment during one of the days of the investigations at the Tema fishing harbor, my cover was blown at the premises of Labianca Company Limited by armed officers of the Ghana Police Service who were providing security there.

Together with an Associate of Labianca company limited, they cursed and threatened to assault me. Armed offices from the Customs staff association quickly shielded me and escorted me to a nearby vehicle to prevent what would have been a brutal assault.

After months of investigations, JoyNews uncovered that by virtue of the misdescription of content of containers, the companies involved in the entire operation collected, name, and shame, underpaid a tax amount of GHS4.6 million.

Following the revelation, JoyNews confronted a representative of Ayax Company Limited with documentary evidence to enquire why the company gave misleading information to the state. His explanation was that the shipping company is the one that committed the error by deploying a container with content other than what they had purchased.

Meanwhile, attempts to get a response from White Stone frozen food limited have not yielded the desired result.

Months of attempts to get a top hierarchy at GRA to comment on the findings of this investigation have so far proved futile.

A junior rank officer at Customs who spoke with me on the condition of anonymity said, “Persons with political backing are now doing it (deliberate misdescription of products) with brazen impunity. The difficulty we have is how the law is applied. Perpetrators are allowed to walk after paying the difference when they are caught…that for me is not deterrent enough because many of them get away with it.”

The Customs Act of 2015 is clear about what should happen to persons who fall foul of the provisions.

A person who “furnishes or causes to be furnished any information relating to any matter under this Act which the person knows to be false, commits an offence and is liable on summary conviction to a fine of not less than two thousand five hundred penalty units and not more than seven thousand five hundred penalty units and any goods in respect of which the act was committed is liable to forfeiture to the State.”

A portion of this penalty was triggered when after our investigations customs officials presented documents and evidence of misdescription to the companies.

There was however no evidence of forfeiture of the goods.

According to Customs officials, leakages like the one uncovered in this investigation are among the drivers of the country’s failure to generate enough revenue at the ports, making government’s ambitious Ghana Beyond Aid agenda ever herculean.

DISCLAIMER: The Views, Comments, Opinions, Contributions and Statements made by Readers and Contributors on this platform do not necessarily represent the views or policy of Multimedia Group Limited.
Tags:
Ayax
frozen food companies
Frozen tax
Labianca