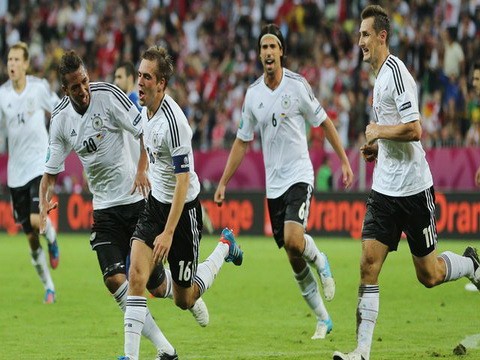 Germany produced a dominant display to sweep past a limited Greece side and set up a possible Euro 2012 semi-final with England.

Germany wasted a host of early chances before captain Philipp Lahm fired them ahead in spectacular fashion.

Germany will now take on England or Italy in the last four in Warsaw next Thursday.

But his decision was vindicated as young replacements Reus and Andre Schurrle turned in energetic performances either side of the vastly experienced Klose, who saw an early strike ruled out for offside.

Reus in particular could have had a couple of goals in a first 45 minutes completely controlled by Loew’s side, with the coach growing visibly frustrated as the half wore on and his team wasted a flurry of openings.

The breakthrough came just before the break when Bayern Munich full-back Lahm cut inside from his station on the left and thrashed a right-footed shot from 20 yards which bent wickedly past goalkeeper Michalis Sifakis and into the corner.

Greece coach Fernando Santos made two changes at the break as he attempted to offer some sort of attacking outlet and, despite the opening 10 minutes continuing the pattern of German ascendancy, Samaras then struck against the run of play.

Replacement Giorgos Fotakis released Salpingidis down the right, and he was able to pick out Samaras at the back post to slide in from close range.

If it was an examination of this Germany side’s credentials, it was one they passed with ease as they responded by scoring three goals in 13 minutes.

First Khedira – playing in a far more advanced role than the one he fills for Real Madrid – showed fine technique to strike a volley into the roof of the net, before Klose took advantage of some poor goalkeeping by Sifakis to nod in a simple header from a free-kick.

It was Klose’s 64th international goal and his 17th in a major tournament.

Reus then grabbed the goal his performance deserved with an emphatic finish off the underside of the crossbar after Sifakis had smothered Klose’s shot, before Salpingidis reduced the deficit from a penalty awarded for handball against Jerome Boateng.

It was a performance by Germany that made pre-match talk of Loew taking a gamble with his team selection look rather fanciful.

And for semi-final opponents Italy or England, there is also the knowledge that the trio of Podolski, Gomez and Mueller – with 79 international goals between them – will now be desperate to earn back their places in the starting XI.