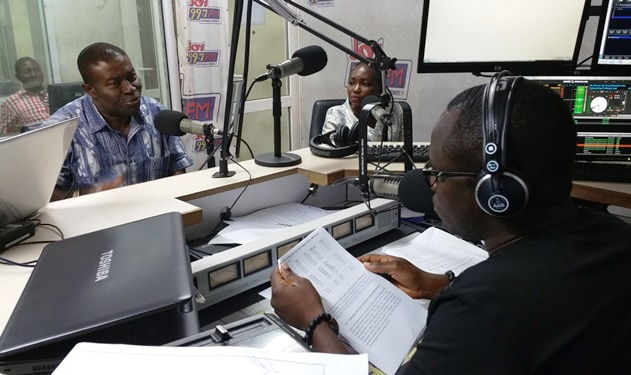 The call by the largest opposition NPP for a new register, which has already been pooh-poohed by the governing NDC, was the subject for intense scrutiny on Joy FM’s Ghana Connect Friday.

The show had in the studio a young female activist and former student leader, Regina Amega, and NPP Director of Communications, Nana Akomea.

The NPP claimed its own ongoing investigations revealed what it described as a smoking gun where 70,000 similar names were found in the Togolese voters’ register and that of Ghana. This among other reasons, the party insisted makes a new register going into the 2016 elections something that cannot be compromised.

But Regina, Silvia and Justice have a strong reservation about the necessity of that call.

Silvia shared an interesting angle to buttress her point. She said her mother with Togolese parentage but Ghanaian by birth holds a voter ID card of each country but only votes in Ghana. Her father has a similar story. He is a Ghanaian domicile in Ivory Coast: he also has national ID cards of both countries and eligible to vote in either of them.

She is wondering how her mother would be disenfranchised when legally she qualifies to hold a national ID card of Ghana. She juxtaposed this with NPP’s reason for saying that Ghana’s register is over bloated.

Giving a legal perspective to the discussion, in an earlier recorded conversation, Samson Lardy Ayenini outlined conditions under which dual citizenship is allowed.  For instance one can be a citizen of Ghana by adoption, birth, marriage and naturalisation, he noted.

Nana Akomea agreed in part the “peculiar case” as narrated by Silvia. But the NPP’s concern, reiterated, is about the quantum of the number involved.  May be 200, 300 or “a thousand people will not raise any alarm”, he stressed.  The party is yet to exhaust a similar exercise along the borders of Burkina Faso and Ivory Coast borders after the first one in the Volta Region which is the stronghold of the NDC.

On her part, Regina maintained that there is no need for a new register. She questioned the guarantee that the new one that the NPP is calling for would not have the same problem. She made reference to similar calls which necessitated a new register in the 2008 elections.

The current voter register should rather be audited, she suggested.

“It means there have been more people registered than we should have,” Matthew explained and backed calls for a new register.

His stand was sharply contrasted by Justice.  He holds the view that the lead advocators of a new register, NPP, have failed to provide sufficient grounds to buttress their calls.

The call is a necessary condition, he conceded though.  However their investigations, to him, is defeated or flawed by their limitation to selected regions sharing boundaries with neighbouring countries. He said there is ample evidence that a region like Central had an abnormal increment in the eligible voters but is not being considered by the NPP because it is not sharing boundary with any country.

Nana Akomea was however quick to point out that Matthew’s analysis exposes the fact that he lacked basic understanding of the work executed by the NPP which the demand is premised upon.

Meanwhile the Electoral Commission has stated emphatically that it would not compile a new register if the NPP and persons calling for it fail to provide convincing evidence that persons whose names were found in both Ghana and Togo’s registers were illegally captured.

While some people who contributed to Ghana Connect through social media rejected the call, a fraction of those who backed the call even want the NPP to give incontrovertible evidence.