Ghana has only 74 eye doctors 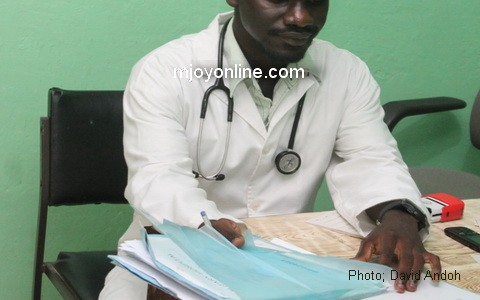 The Minister of Health, Sherry Ayittey, has disclosed that there are only 74 ophthalmologists in Ghana.

According to her, "There are a little of over 74 ophthalmologists currently in the country attending to over 24 million peo­ple."

In her estimation, about 50 percent of these ophthalmologists in the country were practising in Accra.

' The Health Minister disclosed this on Tuesday when she was inaugurating an ultra-modern eye centre at the Komfo Anokye Teaching Hospital in Kumasi.

According to Madam Ayittey, the three northern regions in the country could not even boast of three ophthal­mologists, pointing out that the situation was frightening for the country, which needed to be addressed as soon as possi­ble.

The eye centre, built and furnished at the staggering cost of Ghc 4million through a collaborative effort of KATH and its foreign partners was inaugurated at a colourful ceremony.

The two-storey edifice with a base­ment, aimed at boosting eye care in the country, was started in August 2010 after a Memorandum of Understanding (MOU) was signed between KATH man­agement and Himalayan Cataract Project (HCP.)

The 50-bed ward boasts of amenities such as three state-of-the-art theatre com­plexes with five operating tables, a spa­cious out-patient department (OPD), a training/lecture wing, a diagnostic section and consulting rooms, among others.

Ms Sherry Ayittey described the opening of the eye centre as a mark of another milestone in the history of eye care in Ghana, stressing that edifice would help bridge the accessibility to healthcare gap.

The Health Minister also expressed concern over refusal by doctors and nurs­es to accept postings to the rural areas, a situation which had contributed to the people living in the rural areas not get­ting access to quality healthcare includ­ing eye care.

She, therefore, charged the Director General of the Ghana Health Services to quickly do something about the inequali­ty of Ophthalmologists in the northern part of the country, giving assurance of her ministry's readiness to help make accessibility of eye specialists to the entire populace.

Prof Ohene Adjei, CEO of KATH, in his remarks, expressed delight over the opening of the modern centre at the hos­pital, tasking the hospital's staff that would work at the eye centre to "justify the huge investment made in the con­struction of this world class infrastruc­ture by working harder to deliver an even better quality service to the public."

He also urged the eye unit of KATH to take advantage of the facility to redou­ble efforts to expand access to quality ophthalmic care especially in deprived communities to help reduce avoidable blindness in the country.

The KATH CEO urged the eye unit to undertake outreach programmes and design basic courses in the diagnosis and management of common eye conditions for health staff in district hospitals with­out ophthalmic professionals to go a long way to improve eye care services.

Prof Ohene Adjei reiterated his appeal to the authorities concerned for the release of adjoining lands at the eye centre which is currently being occupied by the military, to be released to – KATH.