Ghana: Is it leadership or vision that we lack? 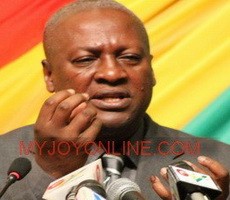 These days a number of articles are appearing in various Ghanaian online forums with a common theme. They are all lamenting the dearth of leadership and by extension the lack of vision in Ghana.

The articles have no doubt been prompted by the difficulties the country is going through on the economic front coupled with the seeming lack of real direction.

The existing infrastructure is inadequate to support economic and social activities and the existing few   care collapsing with no determined effort to halt the slide.

There is massive youth unemployment and the only industry thriving is that of serial callers, who have no understanding of issues, but join the teeming ranks of sycophants who feel they must do well to defend their political masters as the only way to survive.

Of course who can ignore the naked corruption in high places: the judgement debt industry and the various non-sustainable youth employment modules set up to cover diversion of state resources into private pockets?

The first article that got me really thinking was that by Kwame Gyasi published on Peacefmonline on or around 11th March this year titled: “GHANA? – Forget It; We Can Never Make It. Period”.

In that article, the writer was bemused by the messages then being posted in newspapers congratulating Ghana on attaining 56 years of independence. He felt Ghana did not deserve those messages amidst the naked greed and gargantuan corruption that had infected all facets of society from politics to religion to labour unions and academics.

In recent days, we also have been reading about the level of public borrowing and how government spokespersons appear to be justifying it as the only course of action. They are saying nothing about reforms to make the delivery systems transparent and efficient; they are saying nothing about cutting back on public expenditure by limiting the number of political appointees who bring nothing to the table other than being rewarded for their part in winning power; and there is nothing said about reducing our reliance on donor funds.

Is it not very disturbing that the managers of our economy failed to adequately factor in the risk with prices of commodities when drawing up our budget? Any economist worth his salt knew that the high prices of commodities were due to investors seeking refuge for their funds as the Western economies slowed down and that as these economies recover the prices were bound to go down.

If you situate all these alongside the optimistic statements made by our President before the UN and in front of other US audiences, you cannot but throw your arms up in exasperation.

And some have done so too. On 5th October, Daniel Pryce posted an article on Ghanaweb titled: “Can Any Good Thing Come Out of Ghana?” asking Ghanaian voters to, in 2016, ‘look beyond party affiliation and select a selfless and forward-thinking leader’.

He wrote profusely about some of the qualities of a political leader. He then concluded by prescribing how voters can select such a leader: it should be based largely on the candidate’s character and achievements.

Then on Monday, 7th October, Dr Arthur Kennedy weighed in with an article on Ghanaweb titled: “African leaders and leadership”. His appears to have been spurred by the Lampedusa boat disaster in which over 200 would-be African migrants have drowned in their quest to seek better lives in Europe.

Dr Kennedy was also lamenting the lack of leadership in Africa (including Ghana) that is causing our people to vote with their feet by fleeing the continent. He could not understand the claims by present African leaders, who keep on proclaiming that this century is Africa’s and yet are themselves doing nothing to ensure that. Neither could he understand past African leaders, who during their rule did not change the game that much but are now also joining in bemoaning the lack of leadership in Africa.

There are many more articles of this kind appearing on other online platforms, which taken together, suggest an emerging consensus that Africa lacks leaders and leadership. Is this because all peoples of Africa lack leadership qualities or that people with leadership qualities are either not offering themselves or are not being given the opportunities to serve their nations?

Some might argue that the latter is more the truth. We have on the continent men and women in non-governmental capacities who are excelling, even against obstacles erected by their own governments.

We also have Africans serving in international organisations and occupying positions in companies and firms in Western countries, who are also excelling. At times we have even drawn political leadership from these people.

To achieve personal goals requires the desire to succeed no matter the odds. In reality, though, we do not summon the same amount of energy, dedication, determination and desire when it comes to achieving in political office.

Ghana has arrived at the current situation because we do not have enough of the right kind of people in political leadership.

Political leadership qualities do not come out of academic and professional qualifications. It requires honest and truthful individuals who have particular love for their country and who want to leave a legacy.

It requires fellow-feeling that is not imparted through formal education. It comes out of ones upbringing and personal values acquired through experiences during ones formative years.

Eventually they make no impact at all and they leave no lasting legacy. There is enough evidence of this all across Africa and more so in Ghana.

We need people who are willing and eager to challenge the conventional ways of doing things in political leadership.

They ought to be hands-on in their daily dealings and must be activists in the cause they believe in. They should not be afraid to fail if it is not for the want of trying something new. It is very difficult to find such people in Ghana with our vindictive politics  Ì¶  especially when our leaders live like Arabian Kings surrounded by sycophantic courtiers.

This then brings me to the question of vision. What actually is it? Vision flows out of good leadership and for me it is akin to a dream that extends into the future based on the realities and possibilities of today.

Vision involves the imagination of a good set of situations in all facets of national life, wishing it so badly for your country and working systematically towards it with such incredible passion that it occupies every thought and deed.

Visionaries can look at unsatisfactory situations within their sphere of influence and are able to draw a mental picture of how satisfactory they want them to look like in the long term. They are able to ‘infect’ everyone around them with this mental picture to make them all want to join hands to achieve it.

Visions do not have to be situated in the abstract. They have to be stated simply such that all can understand, imagine, and believe in it even if they have no tangible idea of how the ultimate would look like.

We need selfless leaders in Ghana who will paint such a vision, situated in reality, who are willing to preach to move a critical mass of Ghanaians to believe in that vision. Such leaders need to be sincere and open for people to be prepared to endure hardships knowing that the future would be better.

They should be morally upright and should be seen as suffering alongside their citizens. It does not require calls to ‘tighten belts’ whilst the leadership classes feed fat and live lives of luxury at the expense of the citizenry.

It does not require empty talk; neither does it require meaningless sloganising. All that is required is the appreciation of the problems, the painting of a clear picture of the final solution, and the resourcing and implementation of integrated action plans sign-posted with defined achievements over defined time frames.

In Ghana we are very good at describing the problems, which in itself is not bad. Ordinarily it should not be difficult to paint a vision where problems abound, and we have lots of them.

Where we have failed is how to come out with an appropriate vision because the people with the right qualities have not been attracted into politics. It may also be that our political systems do not bring such people to frontline politics. The appropriate vision should lift up the whole with the identification and fine tuning of the critical parts.

Those who put themselves up to be elected to lead us do not come into office with policies to lift up the whole. They come to do bit parts, which they convince themselves as doing something for the whole. They probably spend the same amount of resources that a visionary would, but unlike visionaries, their efforts yield no multiplier effects.

Voting for individuals with leadership qualities will not alone be the panacea to all our problems. We also need institutions that are strong and institutions that work. We ought to have delivery systems that are transparent, modern and efficient. Part of the reason why Ghanaians working for international organisations and Western companies excel is that they work within transparent systems; systems that all respect and adhere to and systems that sanction the flouting of laws and regulations without fear or favour.

In Ghana, though, our institutions are weak  Ì¶  because they are either not independent of the Executive, or are powerless (i.e. not vested with the necessary powers) or are led by individuals who were appointed through political patronage and not on merit.

The acute lack of opportunities has reduced even highly intelligent and educated individuals into sycophants who cannot be heard shaking the cage.

Thus, whilst the majority knows that all is not well, no one is brave enough to say so. The scene has been left to the political operatives and the media, who are either insincere or are not believed by a sceptical public (due to their lack of credibility).

Even if we do nothing else besides developing the will to punish flagrant disregard for laws and regulations the Ghanaian economy would receive a massive boost. That is what a visionary would demand irrespective of political affiliation or one’s station in life.

So finally, to answer the question posed at the top of the article, we really do need the right kind of leadership. All else would follow if we succeed in that. The right kind of leadership will bring forth visions, will reform institutions and systems to deliver, will respect the independence of institutions and will uphold the principle that all is equal before the law.

I wonder though whether the political patronage system we now practise will bring to the fore individuals with the right kind of leadership qualities who will lead Ghana to realise these ideals.