Google is to sell a range of lower-cost smartphones as part of an effort to jump-start sales of its Pixel brand.

In addition, the company has shown off its first voice-controlled smart screen for the home to feature a camera.

This allows it to offer more personalised features than a previous model, but also risks provoking a privacy backlash.

Other announcements at its annual developers conference included enhancements to its search tool.

The Pixel 3a and larger Pixel 3a XL will cost £399 and £469 respectively, making them roughly half the price of the seven-month-old Pixel 3 originals.

Until now, Google had charged one of the highest entry-point prices for an Android handset, with its basic model costing £70 more than Samsung’s Galaxy S10e and £40 more than Huawei’s P30, and no option to buy a “mid-range” alternative.

The new versions share many of the features of the more expensive Pixels, including OLED (organic light-emitting diode) displays for rich colours and the firm’s much-lauded Night Sight facility, which uses machine-learning based artificial intelligence to enhance images taken in low-light conditions.

In addition, they will also provide use of Google’s new augmented reality maps, which superimpose arrow graphics over views of the scene ahead. This, the firm claims, will make it easier to judge which direction to set off in.

But to help cut costs the new handsets:

The new phones do, however, include a 3.5mm headphone socket unlike the premium versions.

“For us, what’s important is for Pixel to get into the hands of more and more people,” Mario Queiroz, chief of Google’s product division, told the BBC.

“Most phones in this general price range are phones from last year or from two years ago, or they are phones that are ‘specced’ very differently and even have different brands.

“We wanted to bring a true Pixel experience to this price point.”

Google shipped close to 20% more Pixel phones over the October-to-March period compared with the same six months the previous year, according to market research firm IDC.

However, it still only accounted for a 0.3% share of the global smartphone market, making it the 26th bestselling brand.

Pixel sales should also benefit from the fact that in the US the range will no longer be exclusive to one mobile network’s stores.

But one expert said the move to offer lower-cost models posed risks of its own.

“Many consumers are fed up with the spiralling cost of high-end smartphones,” commented Ben Wood from the consultancy CCS Insight.

“However, this takes Google into dangerous territory from the perspective of competing with existing Android phone-makers. Licensees such as Samsung, which recently refreshed its mid-tier Galaxy A range, won’t welcome additional competition at a time when the smartphone market is already in decline.” 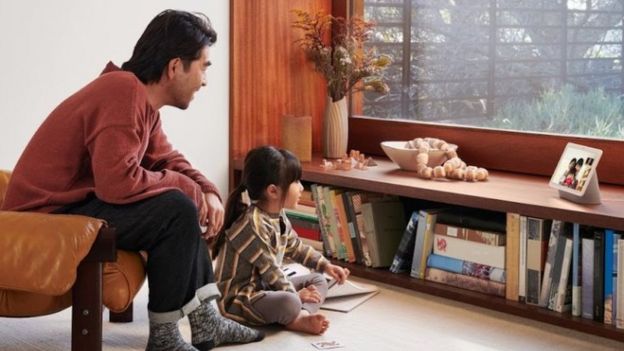 Another hardware launch at the IO event involved a larger version of Google’s voice-controlled smart display for the home.

The device now features a 10in, rather than 7in touchscreen and introduces a camera, which can be used for video chats as well as to provide home security via motion-triggered recordings saved online.

The new machine is called the Nest Hub Max, and the existing smaller version is being renamed the Nest Home Hub, representing an extension to the brand.

Nest used to be run as an independent smart home business within parent company Alphabet, but was subsumed by the Google division last year. 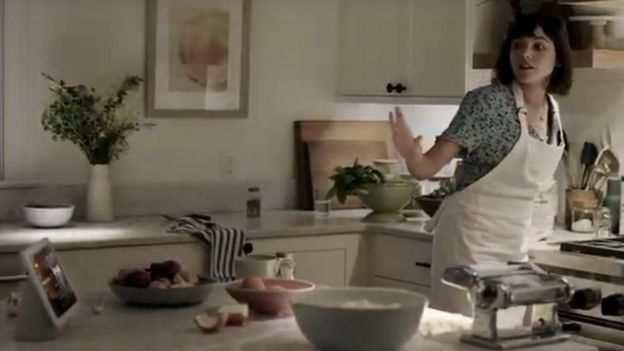 Google explicitly said it had excluded a camera in the original model to help people feel comfortable placing it in their homes.

However, it brings the company in line with Facebook and Amazon, which have released similar camera-enabled devices despite claims that they could pose privacy threats.

For its part, Google has said a small green light will always signal when the camera is streaming footage and that nothing will be streamed or recorded unless the function is explicitly enabled by owners.

It also told the BBC that captured footage would not be viewed by its staff in a similar fashion to how they sometimes listen to voice recordings to improve speech recognition.

“Footage from that Nest cam will not be used or reviewed,” said product manager Edward Kenney.

Users will be able to listen to the recordings directly from the results page, he said, or save them for later playback if they prefer.

They will also be searchable by content as well as title.

The firm’s augmented reality chief Aparna Chennapragada was next on stage to demo how the technology – which mixes together computer graphics with real-world views – will also be used to enhance results.

She revealed that relevant searches would now yield 3D models that can be rotated and viewed on Google’s own page or superimposed over a camera-captured image of the surrounding area.

This, she suggested, would help students explore new concepts or see how consumer goods would match with their current possessions.

Apple has also taken time to promote augmented reality at its recent developer conferences, but outside of gaming the tech has proved more of a gimmick than a compelling feature for many users across their day-to-day activities.

In a follow-up to last year’s big announcement – a feature that allows Google to phone businesses and make computer-controlled voice bookings on a person’s behalf – the company revealed plans to add fresh capabilities to its Duplex software.

In the future, it said it aimed to make it possible for users to ask its virtual assistant to book a movie ticket or a rental car for their next trip, for example.

It said its software would then automatically find a relevant rental car company and fill out all the forms including information about dates and vehicle preference by making reference to past choices and Gmail correspondence.

Duplex is available in most of the US but has yet to launch elsewhere.