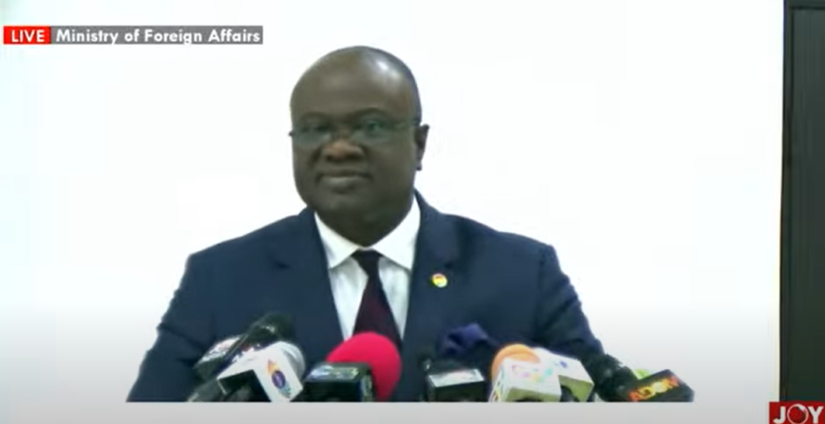 The Foreign Affairs Ministry has denied allegations that it did not seek to uphold the Vienna convention on diplomatic relations in the matter of the demolition of the Bulgarian Embassy.

Addressing a press conference at the Ministry on Wednesday, Deputy Foreign Affairs Minister, Kwaku Ampratwum-Sarpong said the government is mindful of its obligations under the Vienna Convention on diplomatic relations.

“At no point did the Ministry of Foreign Affairs, representing the Government of Ghana, neglect its responsibility of protecting the property of the Bulgarians,” he said.

The Deputy Minister noted that the government, upon being informed of the encroachment on the Embassy’s land, invited the parties and their lawyers to a series of meetings in January this year, to resolve the matter.

He revealed that these efforts notwithstanding, the Ministry has not succeeded in resolving the matter. Rather, the private developer has reached an advanced stage with its encroachment of the Bulgarian Embassy property.

However, the Deputy Minister said the Ministry is still working to resolve the matter, stressing that government has no hand in the encroachment on the Bulgarian Embassy.

Mr. Leighton then extended the lease to 50 years in 1983. However, Kwaku Ampratwum-Sarpong noted that upon the demise of Theophilus Kofi Leighton, the administrator of his estate attempted to forcefully repossess the property over alleged arrears owed by the Bulgarian Embassy.

Unbeknownst to the administrator of the estate, the Bulgarian Embassy had made full payment of the property to the late Mr. Leighton.

The Deputy Minister said the government, being mindful of its obligation to protect the Bulgarian Embassy, summoned both parties for an amicable solution of the matter.

He added that the administrator of the estate dissatisfied with the conciliatory approach by the government, filed a writ for declaration of title to the property housing the Bulgarian Embassy on the basis of non-payment of accumulated rent and order for ejection and recovery of the Bulgarian property.

According to him, the High Court then granted some part of the relief sought by the administrator of the estate, but the matter was appealed at the Court of Appeal which reversed the decision of the High Court.

He said the matter was subsequently heard at the Supreme Court and the Apex court reaffirmed the decision by the Court of Appeal dated July 21, 2011 which affirmed the right of the Bulgarian Embassy in the leased property.

Notwithstanding the ruling of the Supreme Court, the administrator of the estate later sold the property to a private developer who has since encroached the Bulgarian Embassy.

Some personnel from the Cantonments Police Station on Tuesday were reported to have demolished the Bulgarian Embassy.

Ranking Member on Parliament’s Foreign Affairs Committee, Samuel Okudzeto Ablakwa, made this known on his Facebook page on Tuesday, March 15, 2022, adding that the Honorary Consul, Mr. Nicolaas C.M. van Staalduinen was also assaulted in his effort to restrain them.

“According to eyewitnesses, the armed rogue elements with extra fortification from deviant land guards and errant personnel allegedly from the Cantonments Police Station had the sheer effrontery in broad daylight to evict Bulgarian Embassy staff, throw out invaluable assets belonging to the Bulgarians and assault the Honorary Consul, Mr. Nicolaas C.M. van Staalduinen in his effort to restrain them,” he said.

Mr. Ablakwa noted that the development amounts to courting war with the Bulgarians.