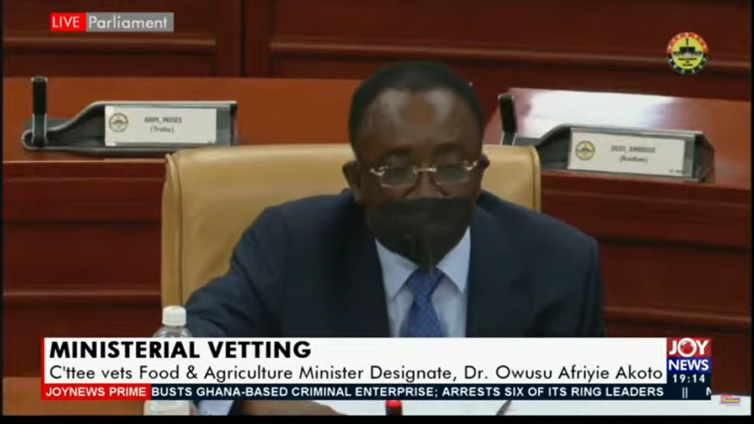 The Minister-designate for Food and Agriculture, Dr Owusu Afriyie Akoto says government has restricted the movement of Planting for Food and Jobs (PFJ) subsidized fertilizers to 20 districts within 5 regions to curtail smuggling into neighbouring countries.

The afore-mentioned areas are known to indulge in smuggling and trading commodities along the border of neighbouring countries.

“We have taken very severe measures to stop the leakage and illegal trade of fertilizers across the borders.

“The reason for this smuggling is because we are the only country around us which has subsidized fertilizer, no country does that so the smugglers have a field day with a huge amount of money if they are able to carry just one bag across the border,” he told the Appointments Committee.

And in order to end this, Dr Akoto indicated that “We [government] have restricted the distribution of fertilizer to the districts that are known to be indulged in this trend; the Upper East, Upper West, Northern, North East and Volta regions.”

Dr Afriyie Akoto told this to members of Parliament’s Appointments Committee when he took his turn at the vetting today.

This follows a statement from the Planting for Food and Jobs (PFJ) Secretariat under the Ministry of Food and Agriculture (MOFA) warning that the programme risks collapsing if a concerted effort is not made to stop the smuggling of government-subsidized fertilizer.

According to the Secretariat, Ghana lost a whopping GH₵120 million from unaccounted for fertilizer, diversion of coupons and fertilizer smuggling in the 2017 and 2018 planting seasons.

But the Minister-designate for Food and Agriculture said as part of measures to curtail the practices, his office has rolled out severe policies to stop the illegal smuggling of the government-subsidized fertilizers to the districts.