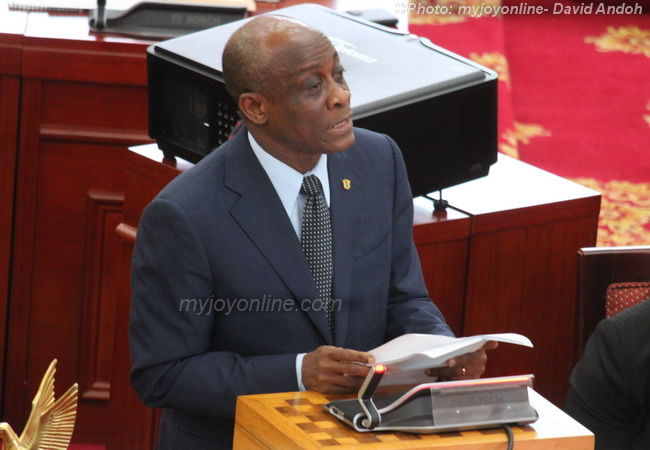 The Majority in Parlia­ment yesterday rushed through an emergency Energy Sector Levy Bill (2015) that will impose more taxes on petroleum products after it was introduced in the House Monday, December 21 by the on Finance Minister.

The new levies, which take imme­diate effect, were strongly opposed by the Minority members who argued that they would impose more hard­ship on the already suffering Ghana­ian.

The Road Fund component of the price build-up is now È»0.40 per litre from the previous È»0.07 per litre.

According to the Finance Minister, the urgent bill is to restructure, re- nationalize and consolidate energy sector levies to promote the prudent and efficient utilization of proceeds derived from the levies to facilitate sustainable long-term investments in the energy sector.

Minority leader, Osei Kyei-Mensah-Bonsu said the entire bill was vague, adding that Mr Terpker did not give specific reasons for the imposi­tion of the taxes.

Making reference to government's claims that it had paid off the Tema Oil Refinery (TOR) debt, he ques­tioned why another tax was being introduced to pay off the same TOR debt.

"This whole bill has not been explained well to us and that the gov­ernment is forcing it through just to impose more hardship on Ghana­ians," he said.

The New Patriotic Party (NPP) Member of Parliament for Tema East, Titus Glover, for his part, did not understand why the government was rushing to pass the bill just to impose more economic hardship on Ghana­ians weeks after it announced increas­es in utility tariffs.

"This government is insensitive and does not feel for Ghanaians."

The NPP Member of Parliament for Kwadaso, Dr Owusu Afriyie Akoto told Business Guide that the government had emptied its coffers through careless expenditure and was just scrapping the barrel to balance the books.

Another $1B Eurobond Approved

The Majority also used its num­bers to approve the new $1 billion Eurobond, which generated a lot of controversy on Tuesday when the minority voted against it.

The speaker said the vote was unconstitutional because Parliament did not have the right, number of members to take decisions in the House.