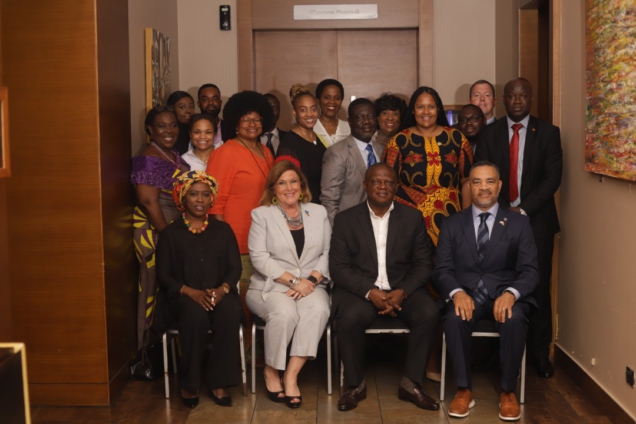 A Delegation from the Greater Memphis Chamber of the United States of America is in Ghana to explore economic opportunities and build strong culture ties.

The visit follows a partnership agreement signed between the Ghana National Chamber of Commerce and Industry (GNCCI) and the Greater Memphis Chamber.

The agreement seeks to promote trade collaborations relating to economic development and commerce between the Greater Memphis Chamber and GNCCI.

This initial agreement is to confirm the Greater Memphis Chamber’s commitment to participate in a series of meetings; either virtual or otherwise, to discuss economic development opportunities, webinars, potential trips, and business alliances.

Mr Mark Badu-Aboagye, the CEO of GNCCI, in a presentation to the delegation, said the Chamber would collaborate with their counterparts in the areas of manufacturing, agriculture, ICT, financial services sector and mining, oil, and gas sectors.

The CEO said the sector, among other things, promoted economic growth and reduced poverty through the provision of employment opportunities and better standards of living.

“There is a strong collaboration between the private sector, government and international partners to ensure sustainable economic growth,” he added.

He said the Ghana Chamber would need support in funding and collaboration to develop, grow the small medium enterprises to contribute to the development of the country.

He said the Memphis Chamber would benefit from the broader African Market with a population of 1.3 billion people.

He said GNCCI was committed to ensuring that the interest of the private sector was protected for shared growth and prosperity.

“The Chamber has and will continue to influence government policies which will be to the benefit of the private sector while promoting the overall development of the Ghanaian economy,” he said.

Madam Susan Hadley Maynor, the Vice President, Economic Development of the Greater Memphis Chamber, said the delegation was in Ghana to learn about the Ghanaian economy and help establish trade partnerships.

She said the Memphis Area has a strong logistics and transportation, education, workforce development and the business sectors.

She said they were host to 80 plus foreign-owned businesses that would get any investor the opportunity to invest.

She said Memphis had experienced significant growth in the past couple of years with 1.35 million residents in the metro area, 68.6 billion in total real GDP and 643,000 people in the labour force.

She said the annual Memphis in May International Festival aimed to bring the world to Memphis and Memphis to the world.

She said in 2022, there were several cultural events held at Memphis’ community centers, museum, galleries, performing arts centers, and schools, paying special homage to Ghana’s past, present, and future.

“We were honoured to host Otumfuo Osei Tutu II, Ambassadors and dignitaries from Ghana with a Black Star Black Tie Gala celebrating the King’s 72nd birthday.

Madam Jiljuana J. Coleman, Global Business Strategist and a Member of the delegation, told the Ghana News Agency that they were in the country to learn about the economy and strike some trade partnership with their Ghanaian counterparts.

She expressed the hope to invest in the society and invite their counterparts to take the opportunities in Memphis and invest.

Madam Shirley McGee-Shack, a Small Business Owner said they look forward to expanding their business in the African continent through Ghana with new trade agreements and to help export.

DISCLAIMER: The Views, Comments, Opinions, Contributions and Statements made by Readers and Contributors on this platform do not necessarily represent the views or policy of Multimedia Group Limited.
Tags:
Ghana National Chamber of Commerce and Industry (GNCCI)
Greater Memphis Chamber