Hammer of the Last Two eulogizes the voice behind his official signature, Mantse 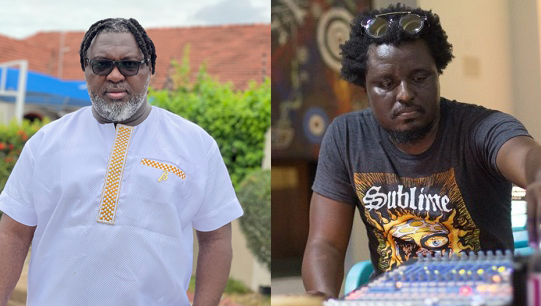 The fine and silky voice was famously known and credited for acting as a host of Hammer’s productions, who introduced new tracks and artistes belonging to the Last Two Music Group into the music industry.

In an exclusive audio obtained by Andy Dosty for ‘The Library’ show on Hitz FM, the “Ako” producer revealed: “Mantse is one of my biggest critics. He is unapologetically real and straight to the point. What you actually hear him do on my works, is actually him approving of my work”.

The “Alampan” producer also shared how Mantse’s voice found its way onto his productions and the rationale behind the idea.

“We wanted an inbuilt DJ… because I didn’t like the fact that my song goes out and the club DJ is talking over the song as a way of introducing it to people. So we got Mantse – he comes in there, talks about the song; artiste and the beat… and then the song starts.”

Hammer will go further to talk about the “inbuilt DJ’s” hidden talents, and how he urged him to develop himself into someone greater than just “a person who was laying intros” for him: “Mantse actually used to be a rapper. He was part of the ‘Funky Functure’ group (one of the pioneers of rap music in Ghana). I made him quit rap because his voice was bigger than it. I made him venture into broadcasting – I pushed him to go to Ghana Institute of Journalism”.

Years after earning the title “Hammer’s Signature”, Mantse went completely off laying intros for the record producer – he became a filmmaker and contributor to the arts investing substantially into it at different levels of the new found global attention and focus on the Ghanaian arts space. He is also the Director of REDD Kat Pictures, and the co-founder of Chalewote Art Festival—a product of ACCRA [dot] ALT.

Majority of the above-mentioned revelations were obtained from the second episode of the brand new radio series – The Library with Andy Dosty on Hitz FM—where the works of ace Ghanaian music producers are talked about and celebrated. The show airs on Fridays from 10 a.m. to 12 noon.

The second part of the second episode (Hammer’s Productions) of the series will air on Friday, 25th February, 2022, and it promises to uncover more facts you probably didn’t know about the highly celebrated sound engineer; the artistes he worked with and the songs he produced.

DISCLAIMER: The Views, Comments, Opinions, Contributions and Statements made by Readers and Contributors on this platform do not necessarily represent the views or policy of Multimedia Group Limited.
Tags:
Hammer of the Last Two
Hitz FM
Mantse
The Library