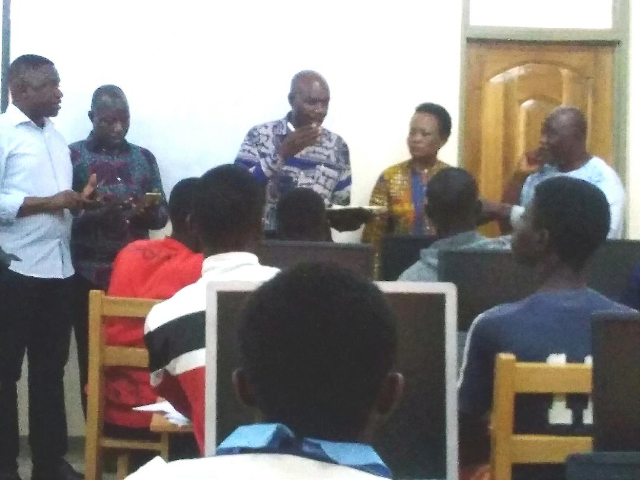 The Headmaster of the Mampong School for the Deaf has called for special examiners to mark scripts of Deaf and Dumb students in the Basic Education Certificate Examination (BECE).

Abraham Yevuson said the hearing impaired used sign language and interpretation as the medium for teaching and learning because of their deficiency and could not be at the same level as those who could hear and speak.

He said as a result of this challenge, the hearing impairment students do not perform creditably in the BECE not because “they are not good but because they mark their papers the same way as they mark those who have no deficiency”.

Mr Yevuson made the call when the Parliamentary Select Committee on Gender, Children and Social Protection paid a working visit to the school to inspect their facilities and assess their situation for redress.

He said the sign language, which was the medium of teaching and instructions for them were not even uniformed due to lack of standardized sign language, especially in local names.

The headmaster disclosed that whiles the Junior High School was three years, “the deaf and dumb are using four years because they need more time and space to learn due to the language barrier”.

He called for the completion of a girls’ dormitory block that had been abandoned since 2007 to ease congestion at the school and the rehabilitation of the Technical and Vocational Department.

The headmaster said the deaf and dumb students tend to do well in the skills training than the mainstream education and urged Parliament to look at ways of improving the technical and vocational training for such special schools.

Dr Kojo Appiah-Kubi, chairman of the Committee, thanked the headmaster for the good work he was doing and assured him that their concerns would be addressed.

He indicated that in line with social protection, the deaf and dumb students must be trained in a way and manner that would be beneficial to them and the society and called for the need to strengthen and enhance their skills training.

The Committee later interacted with some selected students through a sign interpreter and parents who were having a meeting and inspected the abandoned facilities.

On the abandoned projects, Isaac Adjei Mensah, Member of Parliament for Wassa East and member of the Committee said it was beneficial for the country to complete projects started irrespective of who started it.

He said looking at the peculiar needs of the hearing impaired and considering the fact that they were running a boarding facility from kindergarten through JHS and skills training, it was prudent to complete such facilities to improve their situation.