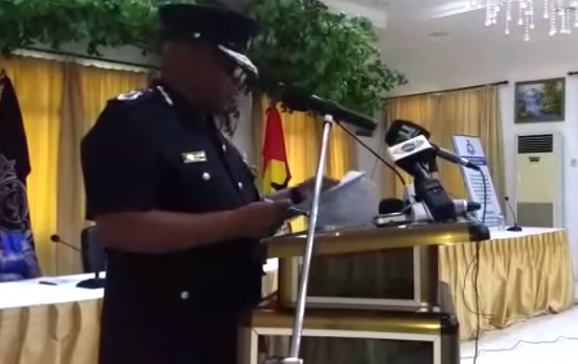 The Inspector General of Police (IGP), James Oppong-Boanuh has called on the general public to assist police in combating crime since it is a shared responsibility.

He said. this collaboration should be maintained, especially, towards the upcoming 2020 general elections.

He said successes so far chalked by the Police could not have been possible without the public and other security agencies and commended all for their support.

The Police Chief was speaking at the Police Services’ festival of nine lessons and carols held in Accra on Friday.

He commended the men and women of the Service for their dedication to maintain law and order in the country.

Assistant Commissioner of Police (ACP) Reverend Father George Arthur, The Police Chaplain called on the personnel to change the public’s erroneous perception of them in the coming year.

He said they should use the festive season to take stock of their 2019 activities and work towards making the service noble and attractive to the public by bearing witness to the truth, upholding professional ethics and abiding by the service instructions.

“Do not take any money from anyone by force nor accuse anyone falsely but be content with what you have,” he advised.

He urged the officers and men to treat the public with respect and dignity.

The Police Chaplin, basing his sermon on the nine lessons, said the fall of man, God’s promise and the birth of Jesus Christ was to atone for mankind’s sin on earth.

The Chaplain said Christmas was a period of gratitude to God, family, friends, employers and subordinates who have touched the various lives.

The event brought together music lovers, the rank and file of the service, men and women, representatives of sister security services and executives of the Police Wives’ Association.

Prayers were offered for the country, the security services for a peaceful Christmas season and families of departed officers.