How an English footballer became a chief in Ghana

Sir Stanley Matthews remains one of England's most famous footballers and was known as the Wizard of Dribble. But he was also arguably the first global icon, paving the way for superstars such as Cristiano Ronaldo and Lionel Messi. And it all began in Ghana, writes Scott Anthony.

Football is the closest thing the planet has to a global popular culture.

Wherever you go in the world, you'll find people kicking a ball around, watching matches in cafes, wearing replica shirts, and betting or playing football games on their phones.

Yet the idea of a footballer as a global icon is a relatively recent phenomenon. The idea that a footballer could bring nations, classes and races together had to be invented. And it was an idea that was arguably invented in Africa.

The story begins 60 years ago in Ghana when veteran English footballer Stanley Matthews strode out to play for Accra's Hearts of Oak against Kumasi Kotoko.

Newly crowned as the first European Player of the Year, Matthews came to Ghana to play a series of exhibition matches to celebrate independence. 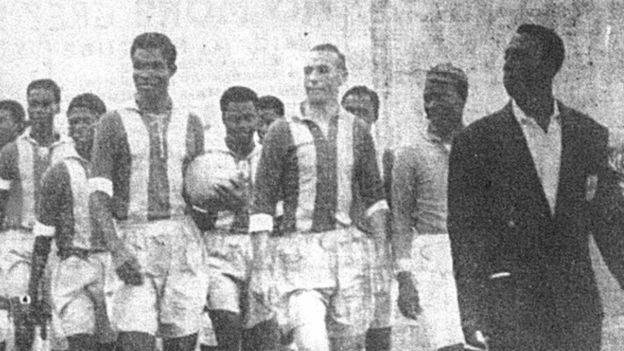 Some Ghanaian players were star-struck playing alongside Matthews 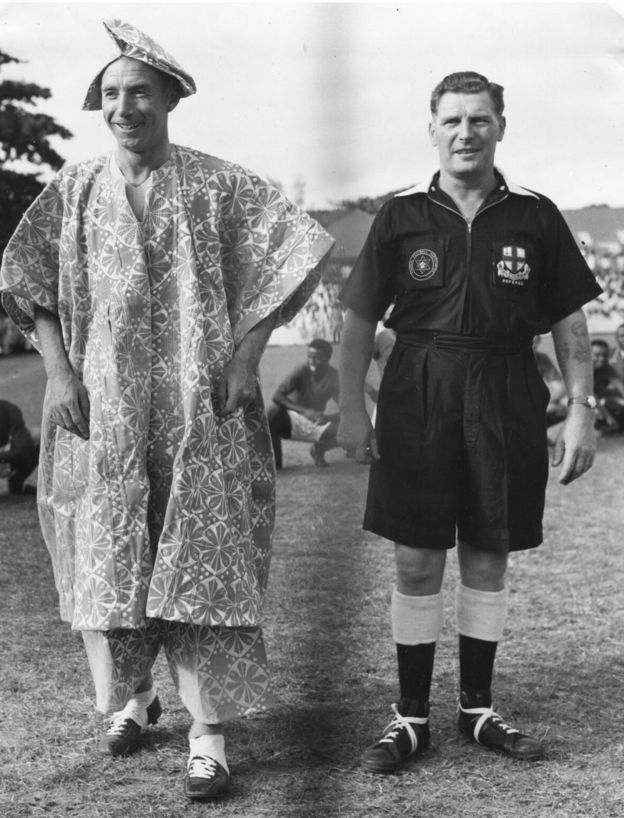 Matthews was installed as a "soccerhene" (soccer chief)

"Matthews' visit had a tremendous impact," says football writer Fiifi Anaman. "When I spoke with some of the players about it, they said they couldn't believe Matthews came – it felt almost as if a god was walking among them."

The media had hyped up the visit, speculating how local hero Baba Yara, "Ghana's King of Wingers", would measure up against the superstar of European soccer.

Matthews was mobbed on arrival and more than 80,000 spectators turned up to watch his first three matches against Kotoko, Sekondi Hasaacas and Kumasi Cornerstone.

Shortly after his arrival, Matthews was presented with an ivory sword and installed as a "soccerhene" (soccer chief) in front of the press.

Matthews' tour of the region led people to compare European and African styles of football.

Newspapers emphasised that Matthews rarely ran, played corners short and almost never passed the ball off the ground. He avoided heading the ball.

His visit prompted calls for Ghanaians to prioritise teamwork and alertness over effort and physicality. 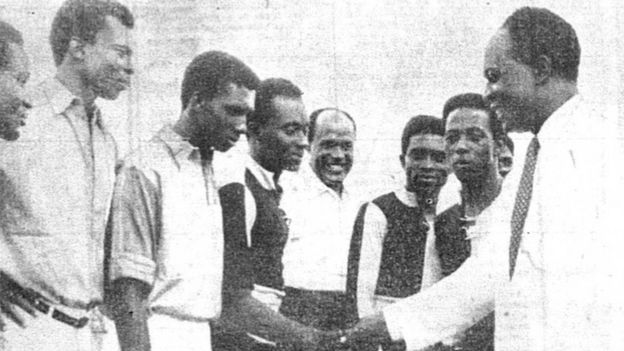 Ghana's first President, Kwame Nkrumah (r) was inspired by Matthews visit to use sport as a national unifier

Even more importantly, Matthews arrived as Ghana's first President, Kwame Nkrumah, was trying to create an identity for Ghana – a country knitted together from numerous different ethnic groups under colonial rule.

Removing the portrait of Elizabeth II from stamps and coins was easy but it was more difficult to create new symbols capable of bringing the new nation together.

In particular, President Nkrumah stressed the need for real-life examples. He wanted to emphasise the idea that you live your values rather than passively inherit them.

The story of Sir Stanley Matthews

The success of Matthews' tour helped convince Mr Nkrumah that sport could also play a significant role in the dissemination of African values.

At this defining moment, Matthews was playing alongside the early greats of Ghanaian football such as James Adjaye, Chris Briandt and CK Gyamfi, who would go on to define that greatness.

Ultimately, Ghana's president believed that sport was the perfect vehicle for the expression of pan-African idealism.

"By meeting together in the field of sport," Mr Nkrumah said, "the youth of Africa will learn what our elders were prevented from learning – that all Africans are brothers with a common destiny."

In the years immediately after independence, Ghanaian football would not only serve as a vehicle for the development of what the president termed "the African personality" but be invested with the hope that it could help build a new kind of global solidarity.

'The saint of soccer'

The England international, aged 42 when he arrived in Ghana, was a compelling if unusual figure.

He had become a celebrity during World War Two when Allied authorities promoted the matches of touring All Star XIs to keep up morale in war zones.

Here Matthews was a propagandist's dream. In addition to his amazing dribbling ability, he was never booked and lived an ascetic life. The contrast between Matthews' modesty and the icons of Fascist sport could not be clearer. 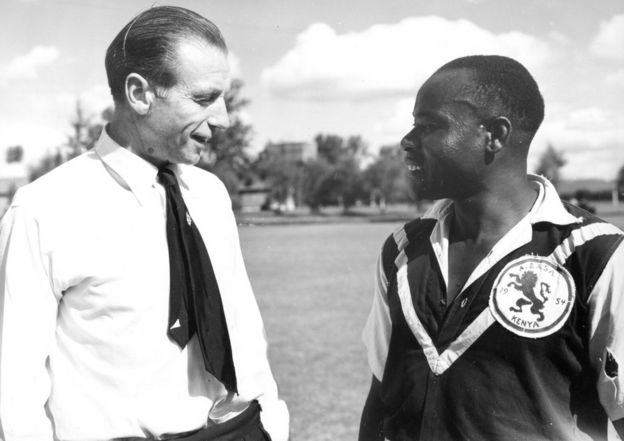 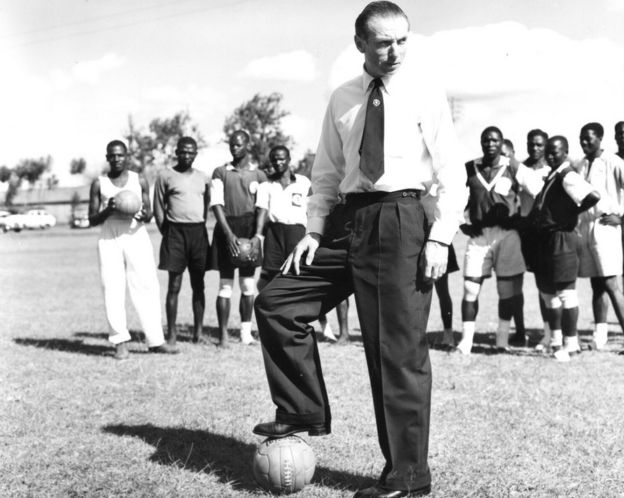 After Matthews' Blackpool beat Bolton in the 1953 FA Cup final, popularly known as "the Matthews final", his fame was propelled worldwide through newsreels and television.

Affection for "Our Stan" grew as his stringent fitness regime allowed him to play professional football until the age of 50. During his visit, Ghanaian newspapers labelled him "the Saint of Soccer" as he visited schools and hospitals.

Independent Ghana required its own brand of heroic gentlemen.

Approachable but exceptional, the example of the "soccerhene" encouraged Ghana's government to make sport and sports stars central to their project.

As independence spread throughout the African continent, Mr Nkrumah's use of sport for nation-building would be widely imitated.

Later in the 1960s, it would become fashionable for icons of global sport, from Pele to Muhammad Ali, to make pilgrimages to newly independent African states.

Immediately after Matthews' visit, the Englishman George Ainsley was appointed manager of the national team, the "Black Stars".

In 1963 CK Gyamfi would coach Ghana to victory in the African Cup of Nations, a trophy they retained in 1965.

Mr Nkrumah also pushed Fifa to guarantee a spot for an African side at the World Cup, which was introduced after African nations boycotted the 1966 World Cup.

Matthews himself would become a regular visitor to Africa, playing and coaching in countries such as Kenya, Nigeria and South Africa. 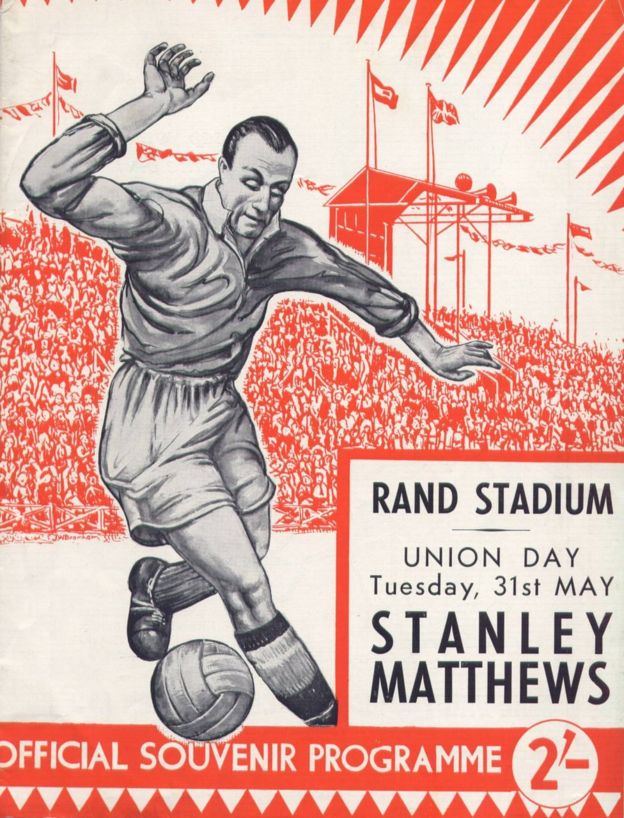 In later life he favourably contrasted the collective spirit of African football, especially in Soweto, with the economic bigotry he saw taking over the game in the UK.

"Going into the townships at a time when racial discrimination was at its most intense [was] something that had all kinds of ramifications," remembered Archbishop Desmond Tutu. "It made a dent in the apartheid armoury."

In Ghana, President Nkrumah's politicisation of football would prove a double-edged sword, as the regime's centralising and authoritarian tendencies eventually brought the league into disrepute and fanned regional factionalism.

Internationally, however, African governmental activism broke the European and South American duopoly over football and in the process the idea that football was an uncontainable and universalising global force was born.